Today in Yerevan, at the initiative of the NGO “Integration and Development” and the Eurasian Expert Club, together with the “Armenian National Front” and the “Strong Armenia Together with Russia” movement, a discussion was held on the topic “The process of settling Armenian-Azerbaijani and Armenian-Turkish relations: new opportunities and /or new threats and challenges.” 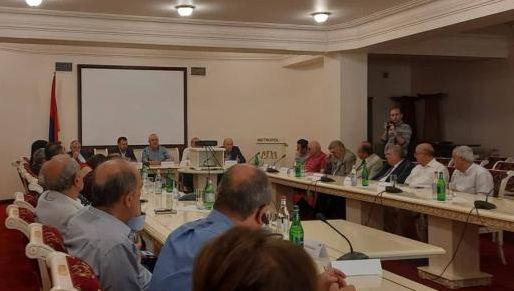 “Peace process” in an atmosphere of hostility and hatred

Presenting the history of the Karabakh conflict, the moderator of the Eurasian Expert Club Aram Safaryan noted that the situation has changed radically after the 44-day war.

“ON NOVEMBER 9, 2020, a trilateral statement was signed between the leaders of Russia, Azerbaijan and Armenia on the cessation of hostilities and the principles of normalization of relations. Negotiations, however, are moving forward with great difficulty, he stated. – As for Turkey, after the collapse of the former USSR, Ankara recognized the independence of Armenia, but diplomatic relations were not established, and in May 1993 the Turkish government closed the land borders with Armenia. Throughout the following years, Turkey has consistently supported Azerbaijan in all areas.”

According to Safaryan, in the context of a tough confrontation between Russia and the collective West, some kind of competition has emerged between the leading geopolitical actors in the Karabakh issue.

“There is practically no difference in the vision of the future in terms of resolving the conflict between them, although it should be noted that Russia, in comparison with any other power centers, has more opportunities, resources and experience in mediation between Azerbaijan and Armenia. In a situation of tougher confrontation with the West, Russia declares its desire to develop relations at the level of strategic alliance with both Azerbaijan and Armenia, he said.

According to the expert, although the OSCE Minsk Group has actually ceased its activities, all the co-chairs declare their desire to continue mediation with a view to a peaceful resolution of the conflict. Meanwhile, the ceasefire regime established by the November 9 agreement is violated at the suggestion of Azerbaijan, which constantly resorts to military aggression, which leads to bloody armed clashes in various segments of the Armenian-Azerbaijani border.

“The peace process is moving forward in an atmosphere of distrust, hatred and enmity, while a number of politicians and experts believe that success in the process of normalizing relations between Armenia and Azerbaijan, as well as between Armenia and Turkey, is theoretically still possible,” Safaryan said. .

For 95% of Armenians, Artsakh cannot be part of Azerbaijan

“The history of the Armenian-Azerbaijani conflict dates back more than a century,” stated Gevorg Poghosyan, a sociologist, academician of the National Academy of Sciences of the Republic of Armenia. – Everyone is well aware that on July 5, 1921, the plenum of the Caucasus Bureau of the Central Committee of the RCP (b) decided to leave Karabakh as part of Azerbaijan. As a result of the First Karabakh War of 1991-1994. Artsakh gained de facto independence. Theoretically, a simple exchange was proposed as a settlement: Armenia returns part of the territories (5 regions) around Nagorno-Karabakh to Azerbaijan, in exchange for which Azerbaijan recognizes the independence of the republic. There was also the option of a phased solution.

AFTER THE 44-DAY WAR, WINNERS and LOSERS have switched places. And now everything will have to start from scratch.

According to Poghosyan, the philosophy of war for Armenians has always been invariably based on the principles of Christianity. The Armenians did not engage in savagery and dismemberment of captured Azerbaijani soldiers, while the opposite side did all this, moreover, publicly replicating photo and video footage of their own atrocities. He also stressed that numerous public opinion polls give a very clear picture of the attitude of the population of the countries towards their neighbors – we are talking about Armenia, Azerbaijan, Turkey.

Thus, in 2015, the American Marshall Foundation conducted a public perception survey in Turkey, according to which 83% of the 1018 respondents had a clearly unfavorable attitude towards neighboring Armenia. Six years later, in 2021, researchers from the Turkish Kadir Has University published the results of a study of public opinion trends in Turkey. According to this survey, 83.1% of the respondents stated an unfavorable attitude in Armenia. In fact, Turkish society shows a persistent negative attitude towards the neighboring country.

“Back in 2006, together with Turkish sociologists from the TESEV organization, we conducted a study of the mutual perception of citizens. The results showed a clear lack of an adequate understanding of the neighboring country. According to the majority of Turkish respondents, Armenia is a large unfriendly country from the Black Sea to the Caspian Sea, with a population of 10 million people. In Turkey, for more than a hundred years, the official opinion has been implanted that there was no Armenian Genocide in 1915, and that these were clashes between Armenians and Turks during the First World War. There is no doubt that such a distorted view of one’s own history and neighbors is a direct result of official propaganda,” said Gevorg Poghosyan.

“Our public opinion is also not very optimistic about the unblocking of borders and the opening of transport links with these two countries. Thus, only 5% believe that the opening of transport roads with Azerbaijan can have a completely positive impact on the economic development of Armenia. The same is true for Turkey: only 6% of respondents consider this to be completely positive for the development of the Armenian economy,” the sociologist stated, adding: “56% are sure that Armenia should strengthen its army and armed forces while trying to achieve peace. And only 2% say that we should strive for peace without any strengthening of our armed forces.”

Also, for the absolute majority of Armenians (95%), Artsakh cannot remain part of Azerbaijan. According to the results of an IRI poll in June 2022, only 7% of those polled consider the normalization of Armenian-Turkish relations to be very positive, while another 21% consider it partially positive.

Opinion polls conducted in Azerbaijan in 2005 and 2006 by the SORGU Center for Social Research together with the US IFES Foundation showed that, according to 1600 respondents in Azerbaijan, the biggest problem facing their country is the problem of Karabakh (73%), and only after that – Unemployment (36%) and low standard of living (19%).

“The authorities in Baku are very aggressive towards Armenia. They have repeatedly noted that Azerbaijan has the latest missile systems that can strike at the Metsamor nuclear power plant, which “would turn out to be a huge tragedy for Armenia.” The political leadership of this country has for many years been exaggerating the idea that the Armenians occupied the primordially Azerbaijani lands, that “the policy of genocide of Armenian nationalists against Azerbaijanis has a two-hundred-year history.” The “image of the enemy” is constantly maintained in the Azerbaijani media, Poghosyan stressed.

Unblocking communications is in the interests of Azerbaijan and Turkey, but not Armenia

“Economic aspects of the processes of settlement of Armenian-Azerbaijani and Armenian-Turkish relations should be considered not separately, but together,” said Tatul Manaseryan, Doctor of Economic Sciences, Professor, Head of the Alternative Research Center. – At the same time, it is important to pay attention both to the internal economic interests of each country, and to the general threats to economic security in the region as a whole.

THE FIRST POINT OF OUR AGENDA is the unblocking of communications with Turkey and Azerbaijan. It is, of course, inevitable, just as economic expansion is inevitable not only in Armenia’s agriculture, but also in industry. In other words, we need to think about whether our country is threatened by some kind of “Adzharization”? Obviously, at this stage, the Armenian public is not ready for a complete de-blockade of all types of communications with Turkey, which, let me remind you, at one time grossly violated its obligations within the framework of “football diplomacy” and refused to ratify the protocols signed in Zurich. At the same time, Ankara should also comply with the principles laid down in the conventions it has ratified regarding countries that do not have access to the sea. If they are observed, Turkey is obliged to provide Armenia with access to the sea, and free of charge, which is not being done,” the professor noted.

As for the specific economic aspects of establishing relations with Turkey, they do not look so rosy for Armenia at present, Manaseryan believes.

“The competitiveness of the Turkish economy is a cut above. One cannot ignore the economies of scale, as well as the fact that the Turkish government subsidizes exports. In addition, back in 1993, the Turkish parliament imposed an embargo on the import of Armenian products. Under these conditions, we may lose local production.

Today, the idea of ​​unblocking roads fully meets the interests of two countries – Azerbaijan and Turkey. Neither the political, nor the economic, nor even the humanitarian interests of Armenia are taken into account in any way here. The RA government needs to achieve a controlled situation, as it was done, for example, when creating the European Union, which began with the establishment of a coal and steel union. Strategic materials used in the military industry were brought under control. This is where Armenia, Turkey and Azerbaijan should start. Otherwise, no one can exclude the possibility of a new conflict,” Tatul Manaseryan is sure.

473 cases registered, 212 of which are emergency