The government is obliged to place the Shusha carpet museum

To be or not to be the Shushi Carpet Museum? This issue was devoted to an extended meeting held in the Chamber of Architects of Armenia on the initiative of the Public Council of the Republic of Armenia. Members of the RA Public Council, cultural figures, experts, a representative of the RA Ministry of Education, Science, Culture and Sports, as well as the founder and director of the Shusha Carpet Museum Vardan Astsatryan took part in the discussion. Chairman of the Union of Domestic Commodity Producers Vazgen Safaryan presided over the meeting. 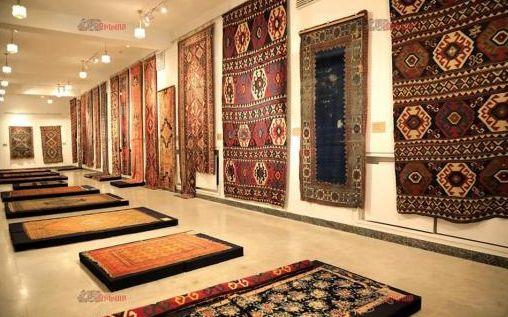 REMEMBER THAT, WHEN IN YEREVAN, ARTSAKH CARPETS were first placed in the Museum of the History of Armenia, but soon, from February 2021, the carpets began to be exhibited at the Museum-Institute of Architecture. Al. Tamanyan. The exhibition for a period of 6 months was extended to a year due to the incessant flow of visitors and the great interest of the residents of Armenia, foreign guests, as well as the agreement between the director of the Museum-Institute of Architecture Mark Grigoryan and Vardan Astsatryan.

As Vardan Astsatryan noted at the meeting, in March of this year, the exposition had to be collected and temporarily sent to the warehouse of the Museum-Institute of Architecture. After repeated appeals to the Ministry of Education and Science of the Republic of Armenia, the leadership of this department promised to help with the decision of the further fate of the carpet collection of 170 valuable samples. During the meetings, Astsatryan was offered to transfer the carpets to the Folk Art Center named after Hov. Sharambeyan or to the Ethnographic Museum of Armenia in Sardarapat. But, having visited the places, he realized that in both cases there would be serious problems with the storage and display of the collection. Both cultural centers have their own carpet collections, and at best, Artsakh carpets have a place in a warehouse where there are no necessary conditions for storing such exhibits. Dampness and microorganisms will quickly make carpets unusable.

A year ago, a proposal was made to place the Shusha Carpet Museum in the former building of the Ministry of Foreign Affairs on Republic Square, now owned by the Argentine businessman Eduardo Ernekyan, but no steps were taken to implement the idea. Now the leadership of the MESCS of the RA offers Vardan Astsatryan to move the collection to the Museum of the History of Armenia, with which there are also many problems.

Vardan Astsatryan also tried to find a solution to the problem in Artsakh, but on a mandatory condition: the Shushi Carpet Museum, which is private, must receive state status. Vardan created the museum on his own initiative, acquiring samples of carpets at his own expense, directly from the owners, who, in turn, inherited them from their ancestors. According to him, over 20 years he spent about 1 million US dollars on the purchase of carpets with the sole purpose of protecting rare samples of the Armenian cultural heritage from the encroachments of Azerbaijanis, who, back in the Soviet years, actively appropriated the Armenian national heritage and tried to create their own culture, taking it away achievements of other peoples, primarily Armenians. The government of Artsakh stated that it was ready to take away the carpets, but it would be able to return to the issue of status only after 3 years.

“At the moment, the Republic of Artsakh does not have international recognition as a state. All issues there are regulated by the peacekeeping contingent, and I consider it wrong to transport a valuable collection of carpets to a zone where martial law is in force without any official obligations and guarantees. If the museum is given state status in Artsakh on the basis of legal regulations, I am ready to wait with the fulfillment of all subsequent obligations,” Vardan Astsatryan said, parrying the statements of some members of the RA Public Council that the place for Artsakh carpets is in their homeland, Artsakh.

“FOR ME VARDAN ASTSATRYAN IS THE HERO OF OUR DAYS, because today 19 Artsakh museums and 23,000 samples of cultural values ​​are under Azerbaijani occupation. He also managed to evacuate the huge collection of his museum from Shushi under the bombing, at his own expense, – said the architect, former Deputy Minister of Culture of the Republic of Armenia Arev Samuelyan. – I agree with the opinion that the Armenian heritage of Artsakh should remain on Artsakh land. But let’s be realistic: if today Vardan takes the carpets to Stepanakert, and Berdzor is handed over at the same time, he will not be able to evacuate valuable samples a second time. One must understand: Astsatryan, by collecting a collection and creating a museum on its basis, saved this valuable layer of Armenian culture from misappropriation by his neighbors and committed a patriotic act. I think that our state is able to find opportunities and find a convenient place in any state building, including in neighboring marzes, where there are empty museums, and take on temporary, for a period of at least 5 years, storage of the collection of the Shusha Carpet Museum “.

Arev Samuelyan stressed that the Museum of the History of Armenia, having a problem of territory, exhibits only 7% of its own archives with difficulty. If Shusha carpets are handed over to him for storage, then at best they will be exhibited for a short time, and then they will go to warehouses and be forgotten.

“The exhibition area of ​​the Museum of the History of Armenia is 1700 sq.m., if 500 sq.m of them are provided by Astsatryan’s collections, then where should the exhibits of the Museum of History go? It would be right to find a separate room for Shusha carpets and create all conditions for the rehabilitation of the Vardan Astsatryan Museum,” said Arev Samuelyan.

Candidate of Historical Sciences, ethnographer, carpet expert Ashkhunj Poghosyan notes that he has been following the history of the Shushi Carpet Museum for almost 15 years – from the moment of its creation and is aware of the national value in question.

“This exceptional collection is of great interest in terms of studying the Armenian cultural heritage, especially its Artsakh part, which we have no equal. Moreover, Vardan Astsatryan not only purchased carpets, but also carried out research work on them, found out the “pedigree” of the product, the place of its creation, the name of the master, etc. He collected the attribution needed to create the future museum. These materials formed the basis of our further expert work on Armenian carpet weaving, said Ashkhunj Poghosyan. – Vardan did a titanic job of collecting Artsakh carpets and their heroic evacuation during the war. But today, official Baku represents him on international platforms as a criminal who stole the “Azerbaijani heritage”, but we are silent in response.”

According to Ashkhunj Poghosyan, it is the indifference of the Armenian state to the collection that allows Azerbaijanis to make such accusations and try to register Armenian carpets, stolen from the storerooms of the Shusha Carpet Museum, as their own in UNESCO. It is pointless to transport samples to the politically unstable Artsakh now. The expert believes that the only solution to the problem of the Shusha Carpet Museum is to reimburse Astsatryan for his expenses for creating a collection and transferring Artsakh carpets to the state property, and in the future, on the basis of this collection, a Carpet Museum should be created in Armenia. Until then, the MESCS may apply to the Urban Planning Committee of the Republic of Armenia, which is in charge of the Museum-Institute of Architecture named after A. Al. Tamanyan, and ask to exhibit Artsakh carpets there again until the issue is finally resolved.

Economist Vazgen Ghazaryan noted that, despite the legal aspect of the issue, all those present must understand that for at least the past 300 years Shushi has been the center of Armenian culture, in which carpet weaving and its centuries-old traditions have occupied a special place. Vardan Astsatryan single-handedly carried out the work of the whole museum, and during the war, the state body responsible for the evacuation of the national treasure.

“HERE WE ARE DISCUSSING THE PRIVATE STATUS OF THE SHUSHI CARPET MUSEUM. And if it were state, what decision would you make? Does the status change the value of the collection? Of course not, – said Vazgen Ghazaryan. There are 3 main points to be clear. Astatryan’s price of 1 million US dollars is minuscule compared to the value of his collection, which is unparalleled in the world. The Museum of the History of Armenia does not have the territorial capacity to exhibit 170 carpets from Shushi. And it is impossible to ensure the safety of carpets in the warehouse of the Museum of History of Armenia. Ancient carpets, like manuscripts, require special conditions. And thirdly, the issue of the Shushi Carpet Museum should be considered in the aspect of national heritage and our cultural heritage, and not its status. Today it is a private museum, but we must do everything to turn it into a state museum in order to preserve the heritage of the Armenian people. I propose to create conditions for the storage of Shusha carpets, find all the possibilities to provide the museum with a separate room and save Vardan from the need to solve the difficult problem of preserving an important part of our cultural heritage on his own.”

Social scientist Karine Hakobyan, emphasizing that Armenia and Artsakh are indivisible, suggested turning to philanthropists and owners, for example, Gagik Tsarukyan, who has an unfinished building near the Moscow cinema in Yerevan, in order to provide the Shushi Carpet Museum with a separate room.

“Today we are not solving the issue of a separate museum. A political issue is being discussed: if we do not give a road to the future for the Shushi Carpet Museum, then we close this road and Artsakh,” Karine Hakobyan emphasized.

Summing up the meeting, Vazgen Safaryan, on behalf of the Public Council of the Republic of Armenia, thanked Vardan Astsatryan for saving valuable exhibits and, agreeing with the opinion on the return of Artsakh carpets to Artsakh, noted that this would be possible if there were political guarantees for the security of Artsakh.

“We have an example of Nakhichevan, where today there is nothing Armenian left, where khachkars, churches and other evidence of Armenians living on this land and our national culture have been destroyed. Having this sad experience, we are obliged to apply to the Armenian government with a proposal to find opportunities to create a Carpet Museum in Armenia, where the collection rescued from Shushi will find shelter,” Vazgen Safaryan said.

Traffic accident in Dzoraghbyur village. there is a victim