After it became known that Armenia would send its military to Kazakhstan within the framework of the CSTO peacekeeping forces, a wave of discontent arose among the Turkish and Azerbaijani political circles, as well as some public and political figures in Armenia, who are traditionally financed from outside. For a long time now, pro-Western circles in Armenia have been working in sync with Armenia’s ill-wishers. 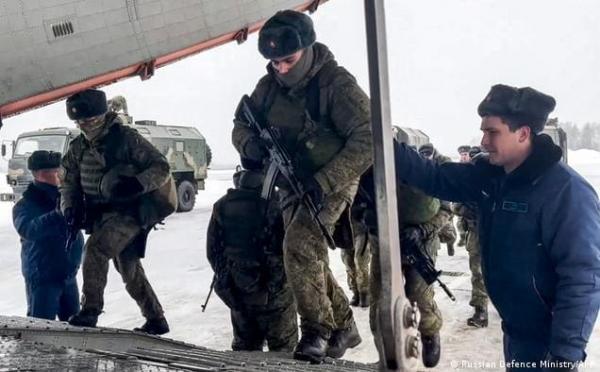 Immediately after the decision of Prime Minister Nikol Pashinyan to send Armenian troops to Kazakhstan, a number of Soros organizations in Armenia made a statement, which noted that they were against the introduction of CSTO troops into Kazakhstan in general, and also condemned the decision of the Armenian Prime Minister on the participation of the Armenian Armed Forces in this process. Then there are accusations against the Russian president of attempting to occupy Kazakhstan, etc. The statement was signed by the following US-funded and Soros-based NGOs:

These individuals are known for their Russophobic stance in everything related to Russia. A similar statement was made on January 6 by representatives of the National Democratic Pole movement led by Zhirayr Sefilyan.

Some attacks on the topic were made by the chairman of the European Party of Armenia Tigran Khzmalyan, the former head of the State Control Service David Sanasaryan, a member of the National Democratic Pole movement Ara Papyan.

The following messages are heard: why should Armenia help the Kazakhs who did not help us ?! Kazakhstan is an ally of Azerbaijan, and we should not help the friends of our enemies, Russia plans to occupy Kazakhstan, but Armenia should not take part in this. The publications of the above persons on social networks carry the same message, and all this suggests that their actions are directed from a single center. A similar picture is in other CSTO countries, where local paid circles made similar claims and demands.

Of course, Turkey is interested in the CSTO peacekeeping forces not being brought into Kazakhstan, as this is a direct threat to Turkish interests and evidence of the failure of Ankara’s plans. Kazakhstan is located in the zone of interests of Ankara and is of great importance from the point of view of realizing Erdogan’s imperial ambitions. It is no secret that there are more than 20 thousand NGOs operating in Kazakhstan, many of which are financed, among other things, by Turkey.

The protests in Kazakhstan are deep-seated. It is naive to believe that the armed men who cut off the heads of law enforcement officials are disgruntled citizens who oppose the rise in gas tariffs. These are radical groups that have been actively trained, educated and amply funded. There is every reason to believe that there is also a Turkish trace in the events in Kazakhstan.

It is clear that it is in the interests of Armenia that Erdogan’s imperial ambitions are not realized, since this is a direct threat to the RA national security. Apparently, many did not like the fact that the CSTO is a real organization that put its mechanisms into action. It was repeatedly stressed that the CSTO peacekeeping forces will not take any part in hostilities, and only the protection of state and strategic facilities will be in the zone of responsibility of the military bloc. Despite this, a real panic began among those who had previously boldly declared that the CSTO did not exist.

The synchronized work of Turkish and a number of Armenian public and political figures, as well as NGOs, raises great concerns. Why do Armenian public and political circles not act in the zone of Armenian interests, but defend and promote Turkish interests? I would like to direct this question to Prime Minister Pashinyan, who, as the chairman of the CSTO Collective Security Council (CSTO), the country’s leader, coordinated the political process of bringing peacekeepers to Kazakhstan.

Poor quality sleep is a “slow-acting bomb”. the specialist presents the consequences of insufficient sleep – Today, fresh news from Armenia

Cables and batteries were stolen from anti-hail stations. The CC revealed more than 40 cases of theft and attempted theft in Armavir marz

More than four dozen cases of theft and attempted theft committed in Armavir marz have been revealed – today, fresh news from Armenia

“Our enemy chains himself to Russia”

"Golos Armenii": Will the CSTO help Pashinyan stay in power?