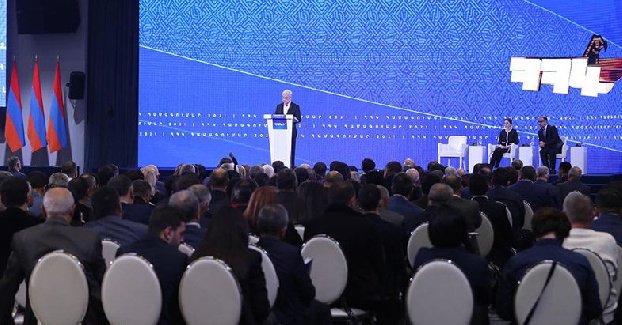 December 19, 2021, 10:30 – News – “Today and here I want to be very open and direct with you, if you like, to the point of vulnerability. Here, I stand in front of you, not overcoming the pain of personal losses and blows suffered, but with the awareness and responsibility that on this segment of the path of our independent statehood, which is rolling into the abyss, alienation with our own pain is unacceptable. They do not take offense at their homeland, they do not take offense at their own people, even if they do not understand you yet, ”said the Chairman of the Republican Party of Armenia (RPA), the third RA President Serzh Sargsyan, presenting the report at the 17th RPA Congress on December 18.

“With my comrades-in-arms, with the parents of many of those in this hall, we have gone a whole path of life and death, where with every soldier who died on the battlefield we died and with every protected height we gained life.

The secret expectation and enthusiasm formed by some over the years, they say, “let us surrender Artsakh – we will live well” disintegrated and destroyed the foundations of our thirty years of independence. The Artsakh issue was and remains the issue of the existence and protection of our people, the issue of preserving our identity and appearance as an independent state unit. And to understand this, our people, unfortunately, had to go through a bloody war full of losses.

Today, there are 85 nations in the world with from three to 30 million population, language, culture, religion, but no state. Do we want to join their ranks ?! Forget the blood of thousands of our brothers and sisters who sacrificed their lives for independence ?! ” – noted Serzh Sargsyan.

Serzh Sargsyan indicated that he and his comrades-in-arms never hid in the bunker. “Our generation believed that fulfilling our duty to the Fatherland was not heroism. Ensuring the safety of our people has been our duty and service. Our generation believed that deeds speak for themselves. Moreover, from the point of view of international relations, it is interesting to state that after the Second World War there were no victories in the world with the acquisition of territories that were not accompanied by sanctions. How could we not clearly explain to our people the meaning of this luck ?! Instead, it was widely advertised “give to live well.” I involuntarily want to ask: are you living well now? ” – he stressed.

this congress is also a kind of watershed. Today and here, as a political force, we will announce the completion of this stage of the self-purification process, based on the results of our elections, we will confirm the determination of those who adamantly stand in the struggle for the values ​​of the Republican Party, and for those party members who are not ready to fight in political trenches, say “goodbye “. There is no place for them in our ranks. It seems that over the past three years we have gone through the most difficult trials. But no. Dear party comrades, you yourself understand that they are not in the past: the trials that have befallen us, our country and people have not ended, and we, as a political force, must be ready to relentlessly fight the villainous traitors who are leading to the collapse of the country and the future of our children. Each of the thousands of our republican comrades sitting here and outside this hall should ask themselves a question and honestly answer: are they ready for sacrifice? The condition for staying in the party must be their answer:

– Yes, we are ready to defend our national values ​​to the end;

– Yes, we are ready to persevere in the struggle for the protection of Armenia and Artsakh, for sovereignty;

– Yes, we are ready to defend our language, culture, church from the attacks of anti-national, alien elements;

“Yes, we are ready to defend our national dignity, our holy land and state, to be worthy of the memory of our heroes, who at all times have fallen a victim in the name of this land and this state,” said Serzh Sargsyan.

Gayane Vardanyan, member of the "My Step" faction of the Yerevan Council of Elders, submitted an application to resign