I am not making a protocol speech at the Congress, but I am talking openly and directly with you – Serzh Sargsyan 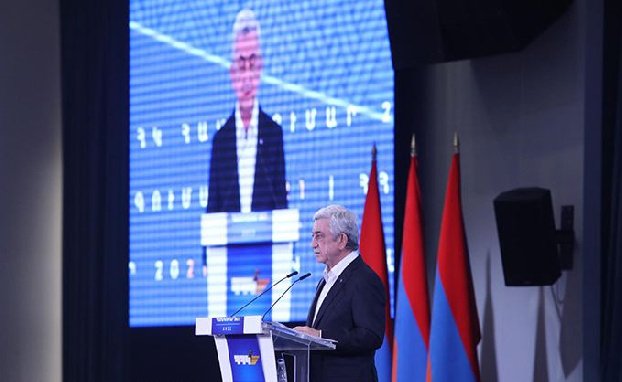 December 19, 2021, 11:00 – News – “This time our regular congress, unlike the previous ones, is held in a different status – being an opposition,” said the chairman of the Republican Party of Armenia (RPA), the third RA President Serzh Sargsyan, presenting a report at the 17th RPA congress on December 18.

“In accordance with this, the reports will differ significantly from the reports of our previous regular congresses, where we presented the priorities of our state policy in various areas and undertaken in the direction of their implementation.

It is one thing to be a member of the ruling party, it is quite another thing to represent an opposition political force. Moreover, this applies not only to the Republican Party and not only to the internal Armenian phenomenon. You and thousands of our party comrades have passed through this transformation or a kind of test. Some did not stand the test, and it was, indeed, an ordeal in the face of violent attacks, blatant lawlessness, pressure, political persecution, slander, attacks on families and children from the populist authorities who have nothing sacred. Not everyone was ready to withstand, resist and preserve the spirit of struggle, and some were just opportunists who at different times always find themselves comfortable, and at such a moment they cleverly leave the political family, putting their own benefit and convenience above all else. Unfortunately, the Republican Party was also not free of those in its ranks.

It was a process to go through and be cleansed. I will not talk about this type of people, because such in the entire history of mankind have been and will be just like many other unfortunate phenomena that must be constantly fought against.

Over the past five years, an enormous number of questions have accumulated, some of which we have previously answered on various occasions. There were also several dozen statements and assessments of the party caused by the situation. Nevertheless, the next congress is an opportunity to summarize the path traveled, to discuss in detail and answer the questions of interest to many of you and a large part of our public, ”he said.

“What finally happened in the past five years?

Why and how did the seizure of power by populists become possible?

What is happening now inside our state?

What are the most serious challenges we face, and what dangers and threats exist in terms of ensuring the security and defense of Armenia and Artsakh?

In what geopolitical environment and in the epicenter of the collision of what interests are we?

What should be done to prevent a nationwide split and the depletion of the powerful potential of our people, always rallied around the common Armenian goals of the people scattered around the world, in order to reverse the steering wheel leading to the abyss?

As you can see, I am not making a protocol speech at the Congress, but I am talking openly and directly with you and I expect the same from you, ”stressed Serzh Sargsyan.

Ishkhan Saghatelyan. "No person officially representing Armenia may sign any political or military document in violation of the procedures provided by the Constitution and laws"