To relentlessly fight the villainous traitors, leading to the collapse of the country (video)

On the path of hope to the recovery of our country, we are obliged to subject the problems to an in-depth analysis, honestly and courageously accepting our share of the guilt and taking our cross of responsibility for the path of hope. As reported by the News of Armenia – NEWS.am, on December 18 at the 17th Congress of the Republican Party of Armenia the head of the RPA, the third President of the Republic of Armenia Serzh Sargsyan stated. 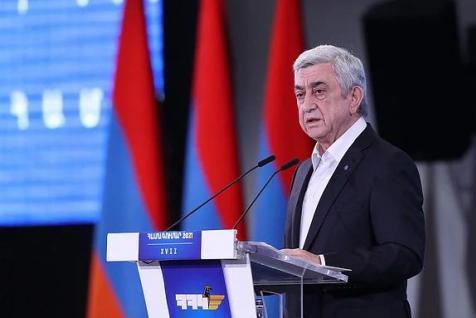 In particular, he said:

“Dear colleagues, I greet all of you at the next 17th Congress of the Republican Party of Armenia and wish you fruitful work.

For our party, this is a regular, but not an ordinary congress, since we can say without exaggeration that it is being held in an emergency situation, when our state and people are faced with serious challenges, and we, the republicans, who stood at the origins of Armenia’s struggle for independence and playing a key role in the state-building process, this situation is of extreme concern and dictates the priorities of our activities.

Today we have the opportunity, I would even say a duty, to discuss the events that have happened with our state, people and party, to voice honest assessments and talk about the future of our state and party.

Dear colleagues, at this reporting congress we should not only discuss internal political issues, define and approve political guidelines, hear proposals and form an agenda.

We cannot change ourselves for the sake of form. We are not one of those who worship the form. Therefore, we are obliged to state the present bitter reality of our country without softening words.

– And the reality is that today every fifth passenger leaves Armenia and never returns, and this is a record figure, of course in a negative sense of the word. I would like you to imagine for a moment the extent of the disaster: while we are talking about the challenges facing our country in this bright room, at Zvartnots airport numerous families with tears in their eyes are bidding farewell to their relatives and secretly cherishing the hope of settling in a foreign country.

– The reality is that today in Armenia almost every third is poor, and this indicator has sharply deteriorated over the past two years. According to the World Bank’s upper poverty scale, 47.6% of the population in Armenia is poor. Meanwhile, just three years ago, people had an average satisfaction of basic needs.

“The reality is that as a result of the 44-day war, 35 thousand people of Artsakh or more than 8 thousand families were left homeless, their settlements came under the control of Azerbaijan. These are not just statistics, but people, fates, family graves left to the enemy, childhood memories, property acquired over the years and an identity threatened.

“The reality is that as a result of the 44-day war, 5,000 families have lost their hope, many have lost their only breadwinner, their purpose in life. 5000 young people never danced at their weddings, 5000 Armenian families were not created, children were not born. And to this demographic tragedy was added the scourge of the pandemic, which took thousands of innocent lives, leaving behind itself, as a result, for our reflection, bitter numbers, interrupted destinies. At the end of 2020, the lowest demographic curve in the history of the last 70 years was recorded, because in our country the number of births and deaths was almost equal. This is also a huge disaster. The anti-national, homeless government washed its hands like a Pilate, turning its back on our compatriots. Leaving an Armenian soldier on the battlefield, they present their own mediocrity to the families of soldiers as desertion, and imperfect management of the healthcare system as an international norm.

The results of this year, of course, have not been summed up, but in the first ten months compared to the same period last year, the number of deaths increased by 6.3%.

“The reality is that our public today is more fragmented, demoralized and wounded than ever before. Today, according to polls, about 70% of the public generally refuses to follow political processes. Today people, by virtue of the instinct of self-preservation, turn away from reality and prefer indifference. Can we blame our compatriots for the disappointment? Have we, in turn, been able to ignite hope in their hearts with our actions? There is a share in this issue and our responsibility, which, undoubtedly, we will talk about.

– The reality is that state security, diplomatic, defense and no less important digital sovereignty, acquired at the cost of huge sacrifices over the years, have been undermined.

– The reality is that our country participates in negotiations only with the subjectivity of the economic and legal unit, while we are a state with a national identity. They can dull the vigilance of people with various propaganda methods, feed them with fabulous lies and keep them in the so-called digital matrix, where the matsun is black, and the political leader wins the negotiation victories with just one sidelong glance. But all this cannot last long. You cannot take people for fools, you cannot find yourself in a difficult situation, you cannot turn people into a shield in a state of hopelessness in order to protect yourself from any rational word and prudence.

– The reality is that as a result of this national catastrophe in our country they are trying to remove human dignity from the agenda. Who is a person without dignity? Let me remind you that dignity is not just a word. It is an inalienable human right. Our compatriots, in conditions of surrender, national humiliation, and lack of security guarantees, are trying to take away this right, when political opponents and their like-minded people are en masse secretly tapped and deprived of the right to privacy; when the state obligations laid down in a difficult psychological and social situation for the family of a deceased soldier are fulfilled by forcing them to wait in queues for hours; when compensations from the Servicemen’s Insurance Fund, operating at the expense of the RA taxpayers and benefactors, are presented as a personal benefit of a capitulator, for which a grieving woman is obliged to stand in front of a video camera and express gratitude. By the way, this is exactly the same Fund, for the creation of which we were once subjected to merciless criticism from representatives of the current regime, and now they are shamelessly squandering what others have created. Dignity is an inalienable right, and the loss of the latter creates an indifferent and demoralized society, which becomes unable to act even from the standpoint of its own instinct for safety.

The psychology of surrender has devastating social consequences.

This is our bitter reality, just talking about it hurts, and life in this reality just drives people crazy. But we must talk about problems, not in order to grieve, but in order to recover. HOPE for recovery, if you like.

On the path of hope to the recovery of our country, we are obliged to subject the problems to an in-depth analysis, honestly and courageously accepting our share of the guilt and taking our cross of responsibility for the path of hope.

Today and here I want to be very open and direct with you, if you like, to the point of vulnerability. Here, I stand in front of you, not overcoming the pain of personal losses and blows suffered, but with the awareness and responsibility that on this segment of the path of our independent statehood, which is rolling into the abyss, alienation with our own pain is unacceptable. They do not take offense at their homeland, they do not take offense at their own people, even if they do not yet understand you.

With my comrades-in-arms, the parents of many of those in this hall, we have traveled a whole path of life and death, where with every soldier who died on the battlefield, we died and with every protected height we gained life.

The secret expectation and enthusiasm formed by some over the years, they say, “let us surrender Artsakh – we will live well” disintegrated and destroyed the foundations of our thirty years of independence. The Artsakh issue was and remains the issue of the existence and protection of our people, the issue of preserving our identity and appearance as an independent state unit. And to understand this, our people, unfortunately, had to go through a bloody war full of losses.

Today, there are 85 nations in the world with from three to 30 million population, language, culture, religion, but no state. Do we want to join their ranks ?! Forget the blood of thousands of our brothers and sisters who sacrificed their lives for independence ?!

My comrades in arms and I never hid in a bunker. Our generation believed that fulfilling a duty to the Fatherland is not heroism. Ensuring the safety of our people was our duty and service. Our generation believed that deeds speak for themselves. Moreover, from the point of view of international relations, it is interesting to state that after the Second World War there were no victories in the world with the acquisition of territories that were not accompanied by sanctions. How could we not clearly explain to our people the meaning of this luck ?! Instead, it was widely advertised “give to live well.” I involuntarily want to ask: do you live well now?

Dear colleagues, this congress is also a kind of watershed. Today and here, as a political force, we will announce the completion of this stage of the self-purification process, based on the results of our elections, we will confirm the determination of those who adamantly stand in the struggle for the values ​​of the Republican Party, and for those party members who are not ready to fight in political trenches, say “goodbye “. There is no place for them in our ranks. It seems that over the past three years we have gone through the most difficult trials. But no. Dear party comrades, you yourself understand that they are not in the past: the trials that have befallen us, our country and people have not ended, and we, as a political force, must be ready to relentlessly fight the villainous traitors who are leading to the collapse of the country and the future of our children. Each of the thousands of our republican comrades sitting here and outside this hall should ask themselves a question and honestly answer: are they ready for sacrifice? The condition for staying in the party must be their answer:

– Yes, we are ready to defend our national values ​​to the end;

– Yes, we are ready to persevere in the struggle for the protection of Armenia and Artsakh, for sovereignty;

– Yes, we are ready to defend our language, culture, church from the attacks of anti-national, alien elements;

“Yes, we are ready to defend our national dignity, our holy land and state, to be worthy of the memory of our heroes, who at all times fell a victim in the name of this land and this state.”

Cafu. "Milan is the favorite in the fight for the Scudetto"