Serzh Sargsyan: My goal was not to retain power, I wanted to preserve Artsakh

Retention of power was not my goal in 2018. My goal was to preserve Artsakh, which means preserving the security of Armenia. This was stated on December 18 at the 17th Congress of the Republican Party of Armenia by the head of the RPA, the third President of the Republic of Armenia Serzh Sargsyan. 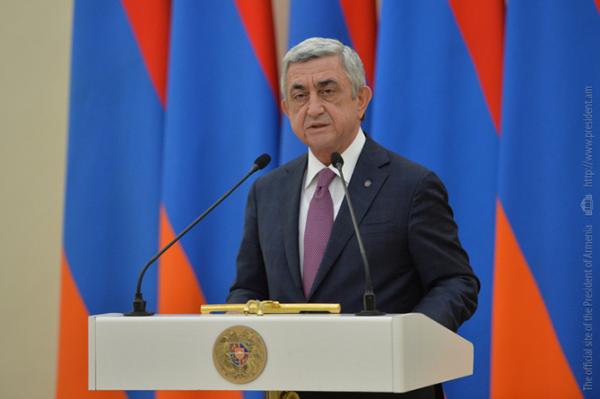 As the Armenian News – NEWS.am reports, he, in particular, said:

“To say that the period under review was the most difficult and difficult years in the history of our party and people means almost nothing to say.

First of all, let me express my gratitude to all the devoted members of our party and loyal supporters, thanks to whom the Republican Party, in the conditions of the countless lawlessness of the ruling regime, including when the power structures and the law enforcement system are put at the service of narrow personal interests, after a hard struggle, not only remained in the political life of Armenia, but even today is one of the leaders in the struggle for the sovereignty, security and defense of Armenia and Artsakh. None of us forgot that at the time of the seizure of power and for a long time after that, the Republican Party and its supporters were the only targets of the nationally destructive junta, until some political forces and personalities began to understand the real motives of the so-called “velvet revolution” and, as they say , did not recognize the tree by its fruits.

During these five years we have witnessed untold perturbations. We saw how, without shocks, a state that has its clear place and role in the international arena, worthy of respect, possessing national dignity and a victorious state develops. And also, unfortunately, we saw the policy of populists, which is destructive for the state, who, with the undisguised assistance of interested external forces and well-known technologies successfully tested in other countries, misled the people three and a half years ago. We saw the violation of national values, the deliberate weakening and weakening of the pillars of the state, social division and demoralization to such an extent that almost every day the anti-state, anti-popular thoughts pouring into the ears of the public through the Overton window opened by the authorities no longer receive unanimous popular indignation and condemnation, as it should be in the case of a people with public health, national dignity and a spirit of struggle.

We are dealing with a phenomenon called the psychology of the vanquished. The capitulating authorities deliberately deepen such a psychological state in the public circle, caused by the defeat they brought, try to psychologically break the national spirit, with false calls for peace to reduce the desire to fight, sow fear, lower national self-esteem by belittling past victories and shameful pictures of humiliation before the enemy.

This chain of events at some point turned into a kind of cascading monstrous clockwork aimed at self-destruction of the nation, which was launched in April 2018, but in reality, this clock was wound much earlier and they, gradually poisoning the public, brought the launch day closer.

During these three and a half years, I had occasions in different formats, through interviews, press conferences, briefings, speeches, during various party events and individual meetings, to touch on the above topics, to present my approaches, and today I will repeat a number of important positions, voiced in these speeches.

In 2018, I left, wishing our country peace, harmony and logic. He left so that our people deceived by the populists with the help of external interested forces who brought them to power with clear geopolitical goals, poisoned by large portions of manipulation, lies and disinformation, calm down so that blood does not spill inside the country and thousands of people gathered on the square build the country of their dreams, so that with the same enthusiasm, they demanded that those who came to power, point by point, keep their promises and be accountable to the people. I would be only glad if this happened, and there was peace, harmony and logic in the country, from which, unfortunately, nothing remained over the past three and a half years.

The real goals of what was hidden under the veil of the “velvet and people’s revolution” are already visible to many today. I clearly interfered with those who, with the hands of these clowns, put me in front of a difficult choice: to leave or, using force, shedding blood in their own country, stay in power. It is not difficult to imagine that the scriptwriters of the so-called “revolution” or its true beneficiaries would then put Armenia in what position, what attitude they would deign, characterizing its leader as a tyrant, and the country as an outcast, and so on. Through new waves of protest, they would provoke instability until they reached my resignation. They were completely uninterested in the fact that the internal political instability in Armenia seriously increases the external threat, that tension immediately arises on the border and the enemy will take advantage of the opportunity. They didn’t care, maybe. Not to me. I took it all into account.

Our power interfered with everyone whose ideas about the Artsakh issue and the future of Armenia did not coincide with our ideas. We were nobody’s, we were our own and promoted our interests, which was not to their hearts. My goal in 2018 was not to retain power at any cost. My goal was to preserve Artsakh, which means to preserve the security of Armenia.

I was nominated for the post of Prime Minister only and only in order to further advance the positions we have consolidated in the Artsakh negotiation process and avoid today’s tragedy. Was it really unclear that the unfavorable solution of the Artsakh issue would cost Armenia extremely dearly ?! I was sure of this, meanwhile they accused me of wanting to hold on to power forever and did everything to remove me.

Today I am asked why I did not use force against the demonstrators. I have said and will say again: it is easy to speak pompously after the fact. It is easy to first consider it correct how we got out of the chaos of those days without shocks, and then, seeing the consequences, change our mind and consider it a mistake.

I assure you: no external actor can achieve success inside your country if he does not have helpers – the Trojan Horse, in order to destroy our house from within with our own hands. Unfortunately, there were some, and our manipulated public followed them. Even today, albeit belatedly, seeing so many disasters and destruction, our public can, with its protest and solidarity, violate the scenario of forces that have different geopolitical interests and goals, show their unanimity and strength in the matter of protecting national interests. You need to understand that every belated step, every next day brings the approaching new danger even closer.

Months after the seizure of power, during early parliamentary elections, we sounded this alarm. At first, the Republican Party was almost alone, and then, together with a number of forces, it called out, shouted, argued and begged our people to think better, to come to their senses, to prevent a catastrophe before it’s too late. Remember, in the December 2018 special elections, our motto was “If you are concerned about the security of Armenia, the future of Artsakh, choose the Republican Party”? Unfortunately, the biblical truth has been confirmed: “there are no prophets in our own country”. The results of the last elections also confirmed that the public is not yet deeply aware of what has happened to it. ”

What football to watch today?