Serzh Sargsyan: 5,000 young people never danced at their weddings, 5,000 Armenian families were not created, no children were born 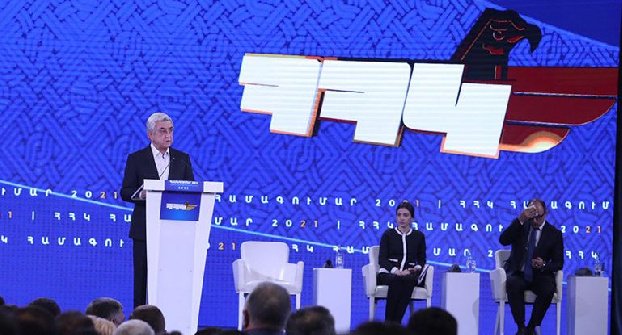 19 December 2021, 08:30 – News – “For our party, this is a regular, but not an ordinary congress, because without exaggeration we can say that it is being held under conditions of a state of emergency, when our state and our people are faced with serious challenges,” said at the 17th congress of the Republican Party of Armenia (RPA ) On December 18, the chairman of this political force, the third president of the republic, Serzh Sargsyan.

He noted that for them, the republicans who stood at the origins of the struggle for the independence of Armenia and played a key role in the process of state building, this situation is extremely alarming, it dictates the priorities of their activities.

“Today we have the opportunity, I would say, the duty to discuss the events that happened to our state, people, party after the previous congress, to give honest assessments, to talk about the future of our state and party.

At this reporting congress, we must not only discuss internal party issues, determine and approve political guidelines, listen to proposals, and formulate an agenda.

We are unable to engage in formalism and deceive ourselves. Formalism has never been inherent in us. Therefore, without softening words, we must fix the current bitter reality in our country.

– And the reality is that today every 5th passenger leaves Armenia and no longer returns, and this is a “record” indicator. Of course, in the negative sense of the word. I want us to try for a moment to imagine the scale of the disaster.

While we in this bright room talk about the challenges our country faces, numerous families at Zvartnots airport are tearfully saying goodbye to their families and hope to settle in a foreign country.

– The reality is that today in Armenia almost every third person is poor, and this indicator has sharply deteriorated over the past two years. According to the World Bank’s upper poverty line, 47.6% of the population of Armenia is in poverty. While only three years ago, people had an average level of satisfaction of basic needs.

“The reality is that as a result of the 44-day war, 35 thousand people of Artsakh or more than 8 thousand families were left homeless, their settlements came under the control of Azerbaijan. These are not just statistics, these are people, fates, family cemeteries left to the enemy, childhood memories, lost earnings for many years and a compromised identity.

“The reality is that as a result of the 44-day war, 5,000 families have lost hope, many of them are the only breadwinner, the purpose of their existence. 5000 young people never danced at their wedding, 5000 Armenian families were not created, children were not born. To this demographic tragedy was added the scourge of the pandemic, which claimed the lives of thousands of innocent people, leaving behind us to ponder the bitter numbers, distorted destinies. From the point of view of demographics, the lowest curve in the last 70 years was registered in 2020, because the number of births and deaths in our country is almost equal. It is also the greatest disaster.

The anti-national and homeless government, like Pilate, washed its hands, turning its back on our compatriots, leaving the Armenian soldier on the battlefield, presenting its own mediocrity to the soldier’s family as desertion, and the inability to manage the healthcare system as an international norm.

The results of this year, of course, have not been summed up, but in the first ten months, compared to the same period last year, the number of deaths increased by 6.3%.

“The reality is that our society today is more polarized, frustrated and offended than ever before. Today, according to polls, about 70% of society generally refuses to follow political processes. Today people refuse to face reality – as an instinct for self-preservation, preferring indifference. Can we blame our fellow countrymen for the disappointment? Were we able, in turn, to light a ray of hope in their hearts with our actions? We have our own share of responsibility in this matter, which we will certainly talk about.

– The reality is that the state security, diplomatic, defense and no less important digital sovereignty achieved over the years at the cost of huge sacrifices have been undermined.

– The reality is that our country participates at the negotiating table only with the subjectivity of the economic and legal unit, while we are a state with a national identity. They can use various propaganda methods to dull people’s vigilance, feed them with mythical lies and keep them in the so-called digital matrix, where the matsoni is black, and the political leader wins the negotiations with one stern look. But all this cannot last long. You cannot hold people for fools, you cannot turn desperate people who find themselves in a difficult situation into a shield, defending against rational words and common sense.

– The reality is that as a result of this national catastrophe in our country they are trying to remove human dignity from the agenda. What is a person without dignity? Let me remind you that dignity is not just a word. It is an inalienable human right. They are trying to take this right away from our compatriots – amid surrender, national humiliation and lack of security guarantees.

When political opponents and their supporters are widely tapped and denied their right to privacy. When the obligations of the state to the family of the deceased soldier, who found themselves in a difficult psychological and social situation, are fulfilled, making them wait for hours in line.

When compensations from the servicemen’s insurance fund, operating at the expense of donors and taxpayers of the RA, are presented as a personal benefit of the capitulator, for which the grieving woman is obliged to stand in front of the camera and express her gratitude.

By the way, this is the very foundation for the creation of which we were once subjected to ruthless criticism from the representatives of the current regime, and now they shamelessly squander what they did not create. Dignity is an inalienable right, and the loss of the latter creates an indifferent and demoralized society that becomes unable to act even from the standpoint of its own instinct for safety.

The psychology of surrender has devastating social consequences.

This is our bitter reality, talking about which out loud hurts, and living in this reality just drives people crazy. But we must talk about problems — not for grief, but for healing. HOPE for healing, if you will. On the path to the hope of healing our country, we must deeply analyze the problems, honestly and courageously accepting our share of guilt and accepting our cross of responsibility on the path of hope, ”Serzh Sargsyan said in his speech.

Seyran Ohanyan. "We can not succeed with these authorities"