On December 18, in Moscow, within the framework of the “Consent” Prize award ceremony, established in 2013 by the All-Russian public organization Union of Armenians of Russia, a number of persons who have distinguished themselves in various spheres of life of Russian society were also awarded the 1st Degree CAP Orders of Merit. Among the awardees there are also representatives of the Kuban – Chairman of the Regional Branch of the All-Russian Public Organization “Union of Armenians of Russia” of Krasnodar Territory Kamo Dikranovich Hayrapetyan and famous patron of the arts Grigory Artashovich Sahakyan… The awards were presented to them by the President of the SAR Ara Arshavirovich Abrahamyan. 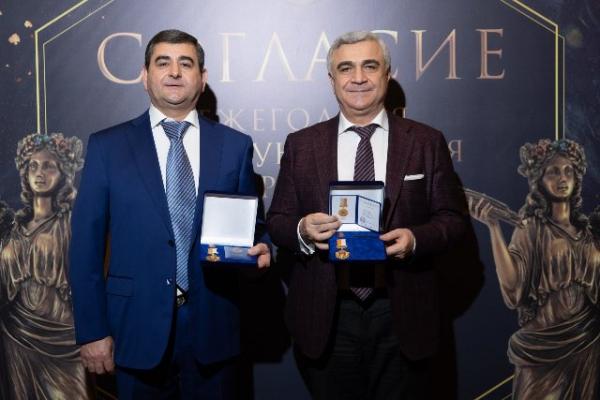 Note that the award ceremony was held in the presence of high-ranking guests, among whom were: Chairman of the Moscow City Duma Alexei Valerievich Shaposhnikov, Chairman of the Commission of the Public Chamber of the Russian Federation for the harmonization of interethnic and interreligious relations Vladimir Yuryevich Zorin, deputies of the State Duma of Russia, heads of various public associations, etc. .d.

REFERENCE: The “Consent” Prize, which has become a symbol of fraternal friendship, unity and mutual understanding of different peoples and countries, is awarded to outstanding figures who have made a significant contribution to the development of the cultural, economic and socio-political life of Russia and the strengthening of its positions in the world. The laureates of the “Consent” Prize are awarded diplomas, as well as an exclusive bronze statuette of the goddess Concordia (which translates as “Consent”), made according to ancient Roman technology.

The score was not opened in the "Real" - "Cadiz" match (video)