Meetings in Brussels: Aliyev and Pashinyan rushed to breakthrough

The meetings and negotiations between Azerbaijani President Ilham Aliyev and Armenian Prime Minister Nikol Pashinyan, first in Sochi on the initiative of Russian President Vladimir Putin, then on the western platform in Brussels with the participation of the President of the European Council Charles Michel, and then in the presence of French President Emmanuel Macron, resemble a multi-act political performance in the Art Nouveau style. Everything turns into a kind of show, where suddenly new actors come out from behind the curtains, and the old ones are rearranged into the second, or even the third plan. And in the course of the development of the storyline, everyone somehow becomes hostages of a hidden scenario, when it is not the original event that determines the unfolding story. 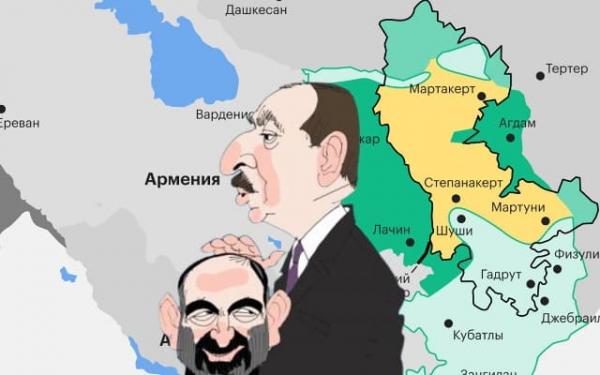 JUDGE FOR YOURSELF. ALIYEV AND PASHINYAN HELD TALKS in Brussels in the format of the Eastern Partnership Summit. Before that, the two leaders met separately with Michel, who acted as a mediator between the parties. At the same time, as the chairman of the European Council said, for some time Aliyev and Pashinyan talked in private. According to many indications, everything revolved around a painful topic for Armenia in the post-conflict settlement – the construction of a road from the main part of Azerbaijan to Nakhichevan, which in Baku is called the Zangezur corridor.

Moreover, judging by the heated controversy that unfolded between Aliyev and Pashinyan after the Sochi summit on this issue, few expected that the parties would be able to move forward quickly. And suddenly in Brussels it became known that the parties “were able to come to an agreement on this issue” and are ready “to begin the restoration of railway lines with appropriate measures of border and customs control based on the principle of reciprocity.” In addition, it is indicated that “the EU will provide a mission of experts to support the delimitation and demarcation of borders by providing technical assistance to both countries.”

In fact, these are the same formulations that were previously announced by the Russian Foreign Ministry, which was trying to bring the positions of Baku and Yerevan closer together, but with its own participation. Now the initiative of the peace process has been partially intercepted by Paris. It is no coincidence, as one of the Baku publications writes, “unexpectedly, French President Emmanuel Macron personally joined the Aliyev-Pashinyan dialogue.” Whatever one may say, but the results of the Brussels negotiations, which are qualified by many as a continuation of the Sochi process, have different results.

One of them is the active inclusion, with the consent of Baku and Yerevan, in the course of events of Paris as one of the co-chairs of the OSCE Minsk Group. Now France is getting a chance to designate itself in Transcaucasia, in addition to Russia and Turkey, as another influential external player, that is, doing what it previously avoided. At the same time, if earlier Macron put his stake only on Armenia, now he acts more broadly, winning the sympathy of the Azerbaijani side as well. The game is worth the candle, because in this way you can wedge not only into the implementation of the provisions of the agreement on November 9, 2020, but also subject it to a certain modernization in your own interests, putting forward your own schemes for “resolving the conflict” at the political and diplomatic level. ”

The intrigue here lies precisely in the fact that earlier Baku saw in the actions of Paris an “insidious conspiracy” in favor of Yerevan, and now it is pursuing a policy of rapprochement with France. Let’s mark one more important point. The many hours of personal dialogue between Aliyev and Pashinyan in a tete-a-tete format presupposes the factor of agreements that do not receive formalization on paper or in a dialogue with the participation of mediators. Many Armenian experts and politicians hint at this.

SO, ARMENIAN PARLIAMENT DEPUTY FROM THE “ARMENIA” BLOC Anna Grigoryan believes that “Pashinyan in Brussels should have engaged in a dialogue with Aliyev on humanitarian issues, and not discussed the problems of unblocking roads, demarcation and delimitation of borders, for which there is a tripartite format at the level of vice prime ministers of Russia, Azerbaijan and Armenia “. According to her, Pashinyan, having agreed with Aliyev in Brussels, narrowed the opportunities for Armenian diplomacy to “play with different centers.” If Michel said that he was ready to provide a consulting platform for the process of delimitation and demarcation, then the Sochi statement of Russia, Azerbaijan and Armenia says that “a mechanism should be created between the two countries”, in fact, a commission, and only after that one can turn to Moscow for mediation.

Let us add to this the statement of Russian President Vladimir Putin that “we do not need the other side to carry out demarcation and delimitation.” This suggests that there is a mechanism of secret oral agreements between Aliyev and Pashinyan, which in the future, according to Grigoryan, “can create serious challenges.” First of all, for Armenia, which previously always lost to Azerbaijan in secret diplomacy.

Aliyev has a specific goal to achieve which he is striving for. It is no coincidence that he called the talks with Pashinyan in Brussels “effective and pragmatic” and added that “it is important not to miss this opportunity and, using it, work to ensure sustainable peace in the region.” And what are the goals of Armenia after the defeat in the second Karabakh war? As the leader of the Enlightened Armenia party, Edmon Marukyan, states, “Armenia speaks only of some incomprehensible” peace agenda “, the strategy of which has either not been developed, or it has not been publicly announced.” Let’s see what’s next.