After June 20, Armenia plunged into repression

The recent detentions of public figures Narek Samsonyan and Narek Mantashyan, as well as the arrest of Vanadzor community leader Mamikon Aslanyan, showed that the hammer in Pashinyan’s hands continues to operate, and the “steel mandate” has already discredited the parliament as a state institution. The past 6 months have shown that the June 20 elections not only failed to resolve the crisis that arose after the 44-day war, but also exacerbated this crisis through political terror and repression. 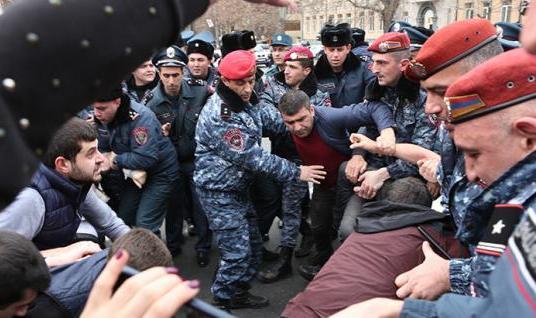 Local elections cast doubt on the results of early elections

December 20 will mark six months since the early parliamentary elections, after which the country actually plunged headlong into repression. The hammer with ribbons in the color of the national flag and the “steel mandate” became the main symbols of the second half of 2021. The campaign for elections of local self-government bodies that ended on December 5 fully confirmed the validity of the opposition’s appeal to the Constitutional Court to challenge the official voting results on June 20.

Let me remind you that PREPARATIONS FOR LOCAL ELECTIONS began at a time when the Constitutional Court had not yet completed the proceedings on the claims of 4 opposition forces. Pashinyan decided to hold local elections by analogy with parliamentary elections, believing that voting on party lists would again ensure the victory of his Civil Contract party. The regime undertook the enlargement of communities in order to bring the number of residents to 4 thousand, and to ensure the holding of elections according to party lists. As a result, the ruling power in a number of communities lost not to influential parties, but to blocs whose names coincided with the names and surnames of their first numbers, and the Arush Arushanyan bloc is not the only one in this case …

“GD” miserably lost the elections in all large communities of Syunik, as well as in Tatev, where the regime failed to appoint Artur Matevosyan as community leader – the author of the scandalous interview that Azerbaijanis are allegedly on their land in Shurnukh. Preparations for elections to local authorities were carried out in all directions: enlarging communities, appointing leaders in status, etc. O. (moreover, the leaders of urban communities were personally appointed by Pashinyan), large-scale campaigning events, asphalting roads and countless promises.

The local elections were intended to confirm the purity and transparency of the early nationwide campaign, and as a result they questioned the official results of the June 20 vote and confirmed the validity of the opposition’s appeal to the Constitutional Court. Elections to local self-government bodies showed that in the absence of those administrative levers that the regime used in the course of national elections, the outcome of the vote looks different.

Was there a possibility of a second round?

If Pashinyan, in violation of all the norms of legality and law, had not retained the full powers of the prime minister after his resignation, his party would not have crossed the threshold in the June 20 elections. After the resignation from the post of prime minister was accepted by the parliament and the president, Pashinyan continued to lead the government, and his marzpets did everything possible and impossible to secure votes in support of the State Duma. It was important for the capitulator to show at the June 20 elections that the people trusted him after the surrender of 75% of the territory of Artsakh following the results of the treaty war and the death of 5 thousand Armenian soldiers. And the local elections, which took place in 3 stages, were designed to consolidate the victory of the ruling party in the national elections.

THE “HAYASTAN” AND “HONOR HAVE” OPPOSITION BLOCS were unable to win the majority in the parliament of the 8th convocation. The question is, at what cost did the “State Duma” secure the “stable parliamentary majority” stipulated in Article 89 (part 3) of the RA Constitution?

The formation of such a majority before the elections was a big question, which is why some parties and blocs hoped to overcome the threshold with the assistance of Pashinyan in order to help the State Duma within the walls of parliament to form a “stable parliamentary majority” based on a coalition. As a result, Pashinyan decided to do without assistants and without coalitions.

“If a stable parliamentary majority is not formed by the results of elections or through the formation of a political coalition, then a second round of elections can be held,” the article says.

If early elections were held bypassing the abuse of administrative resources and without printing hundreds of thousands of new passports, if the regime didn’t use fraud with electronic devices that issued voting coupons without a voter’s photograph, then the likelihood of a second round would be very high. If the elections were held bypassing the fraud with the voter lists and without intimidating the population, then Pashinyan’s party would hardly have been able to form a stable majority …

Elections to local self-government bodies have shown this quite clearly. When asked whether there was a possibility of a second round, today hardly anyone will give a negative answer.

Towards the end of the campaign, Pashinyan raised a hammer over his head, tied with ribbons in the color of the national flag, and announced that this hammer would hit the heads of his political opponents. No sooner said than done: for half a year the country has been living in a regime of total repression. If immediately after the elections, Pashinyan began repressions under the guise of criminal prosecution for bribery and pressure on voters, today we are talking about arrests under the Criminal Code article for “grave insult.”

I RECALL THAT THE ACCUSATION OF PRESSURE on the voters was brought against the deputy from the “Hayastan” faction, Professor Armen Charchyan, as well as the head of the Kasakh community Ara Mkrtchyan, the father of the deputy from the “I Have Honor” faction Anna Mkrtchyan. On this charge, the head of the village of Karahunj, a member of the Goris community, Lusine Avetyan, was detained, who was forced to testify against the head of the community, Arusha Arushanyan. This is not a complete list of those who have been charged with bribery and pressure on voters in 6 months.

Six months later, the topic of electoral violations lost its relevance, it was replaced by an article of the Criminal Code, which was contrary to the Constitution, on inflicting “grave insults”. The shameful defeat of Pashinyan’s party in local elections in Syunik and other marzes called into question the results of the June 20 elections, and also inspired hope that the Armenian society, albeit slowly, is still moving towards enlightenment.

The recent detentions of public figures Narek Samsonyan and Narek Mantashyan, as well as the arrest of Vanadzor community leader Mamikon Aslanyan, showed that the hammer in Pashinyan’s hands continues to operate, and the “steel mandate” has already discredited the parliament as a state institution. The past 6 months have shown that the June 20 elections not only failed to resolve the crisis that arose after the 44-day war, but also exacerbated this crisis through political terror and repression.

Marina Mkrtchyan, “The Voice of Armenia”

Yesterday, the Azerbaijanis tried to evacuate their previously damaged tractor, but leaving the second one, they fled. Mayor of Verin Shorzha - Oices - Hot news from Armenia