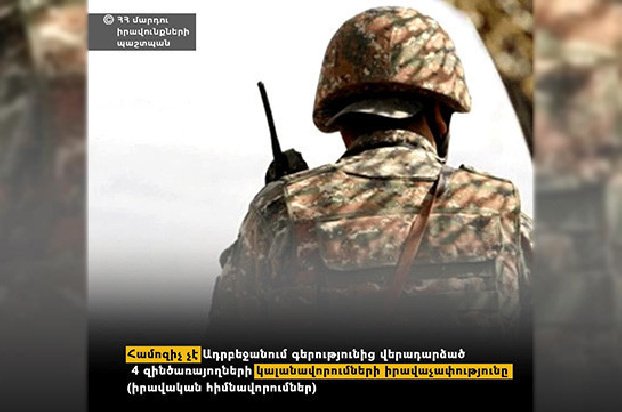 December 17, 2021, 10:40 – News – The lawfulness of the arrest of four servicemen who returned from captivity in Azerbaijan is unconvincing, said the Human Rights Defender of Armenia Arman Tatoyan.

“In particular, we are talking about the Armenian servicemen who were imprisoned after being captured as a result of the aggression of the armed forces of Azerbaijan on November 14 and 16, 2021 and returned to Armenia. This statement is based on the conversations of the Office of the Human Rights Defender on December 14 by the indicated servicemen, several lawyers at the Vardashen and Armavir penitentiaries, studying and comparing documents, taking into account the circumstances of captivity and the international tools for domestic protection of the rights of prisoners.

Therefore, at the heart of this conclusion:

1) Study of the acts incriminated to the said servicemen, as well as the circumstances of their capture in the office of the Human Rights Defender: they are not published, but will be submitted in writing to the criminal prosecution body.

2) Those public statements of a number of high-ranking representatives of the executive and legislative branches that have no connection with criminal proceedings, which contain allegations about the initiation of criminal cases against captured military personnel, the presence of signs of a crime in their actions.

In addition to the fact that such statements violate human rights and do not proceed from the law, it is important that they were made before the return of the servicemen from captivity and were biased. Moreover, they have become widespread in the Armenian and foreign media.

These public statements violated the presumption of innocence of the captured Armenian military personnel as one of the fundamental principles of a fair trial.

They created problems for criminal prosecution: they had an impact on the authorities investigating the criminal case, which was not provided for by the law.

These allegations also created preconceived notions in the Armenian society and in various circles of the international community regarding the proof of the guilt of the military personnel in the acts incriminated to them.

Therefore, statements by high-ranking officials that have no connection with criminal proceedings create a high threshold for confirming the legality of arrests for the prosecuting authority and those considering the arrest of judges – it is most convincing to demonstrate that the criminal prosecution of captured military personnel, and even more so their arrests, were not committed under the influence of the statements of these high-ranking officials of the executive and legislative branches. This should be done publicly, given the widespread public interest and international response.

To date, studies indicate that the arrests mentioned do not meet this threshold.

3) There is ample evidence that the Azerbaijani Armed Forces, law enforcement agencies and other officials have committed various crimes against Armenian prisoners. In addition, the Azerbaijani authorities, violating international norms and the rights of prisoners of war, artificially delayed the repatriation of prisoners, causing mental suffering to their families.

Therefore, the Human Rights Defender demands a written explanation of what measures were taken by the criminal prosecution body of Armenia to clarify the perpetrators of these crimes – violation of the rights of Armenian military personnel – and to ensure their prosecution.

4) It is also necessary to clarify the question of what rules of criminal policy are taken as the basis for filing applications for the arrest of servicemen who have returned from captivity, and why applications for arrest were presented especially in relation to the prisoners of November 14 and 16, which followed immediately after the statements of high-ranking officials persons of the executive and legislative branches.

5) In the current situation, it should also be explained what measures the criminal prosecution authorities have taken to rehabilitate the servicemen who have returned from captivity and arrested.

The Ombudsman’s Office, in addition to conversations with these servicemen in the penitentiary on December 14, also held conversations with servicemen who were arrested in connection with the aggression of the Azerbaijani armed forces on November 14 and 16, but were not captured. Letters will also be sent to the criminal prosecution body regarding their rights.

I specifically note that this statement does not call into question the initiation or non-initiation of criminal cases or criminal prosecutions: it concerns the imprisonment of 4 servicemen who returned from captivity, that is, the legality of the arrest, ”the statement of the Armenian Ombudsman says.