Restoration of communications between Armenia and Azerbaijan should be with respect for the sovereignty of these countries: Charles Michel 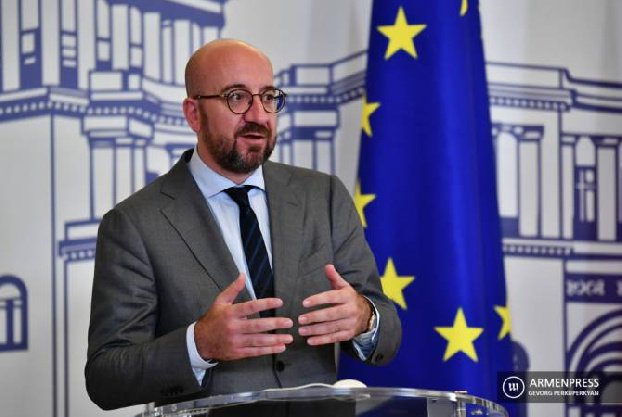 December 15, 2021, 13:20 – News – President of the European Council Charles Michel made a statement following the meeting of Prime Minister of the Republic of Armenia Nikol Pashinyan with President of Azerbaijan Ilham Aliyev in Brussels, which took place on December 14 and lasted for several hours. Charles Michel called the discussions significant.

EU President Charles Michel declared the EU’s readiness to work closely with Armenia and Azerbaijan to overcome existing problems, create an atmosphere of cooperation and trust in order to establish a lasting peace in the region, which, in the end, will be based on a comprehensive peace agreement.

He noted that all parties share the approach according to which a secure, stable and prosperous South Caucasus should be built for the benefit of the peoples of the region.

“Prime Minister Pashinyan and President Aliyev reaffirmed that the key commitments undertaken in the framework of the two trilateral statements of November 9, 2020 and January 11, 2021 (Armenia, Russia, Azerbaijan, ed.) Must be respected, and they will be strengthened by the achieved in Sochi on November 26, 2021 by mutual understanding.

Charles Michel praised the steps taken by the two leaders to ensure relaxation of tensions after the recent armed clashes on the border between Armenia and Azerbaijan. The parties acknowledged that with the assistance of President Michel, a direct link was successfully established between the defense ministers of the two countries. “This mechanism can serve to prevent future incidents and have a positive impact on reducing tensions,” said the EU President.

EU President Charles Michel stressed that addressing key humanitarian issues is critical. He welcomed the return of 10 Armenian captives by Azerbaijan on December 4 and the handover of minefield maps by Armenia. He called for a complete and early settlement of all humanitarian issues, such as the release of prisoners and the clarification of the fate of the missing, while recognizing that humanitarian gestures from both sides contribute to an atmosphere of trust, peace and reconciliation. “The EU will continue to support humanitarian demining efforts, including the provision of expert advice, assistance to conflict-affected populations, and reconstruction. The EU will also continue to support confidence-building measures between Armenia and Azerbaijan, ”Charles Michel said in a statement.

The Prime Minister of Armenia, the President of the European Council and the President of Azerbaijan also discussed the trade and economic partnership between the two countries of the European Union at the moment and in the future. The EU’s intention to launch an economic consultation platform to build confidence, promote peaceful coexistence and strengthen economic cooperation in the region was underlined.

The heads of state agreed that in the context of the planned start of negotiations on the demarcation of the state border between Armenia and Azerbaijan, further tangible steps will need to be taken to reduce tensions on the ground and ensure a favorable atmosphere. President Michel called on Yerevan and Baku to actively participate and work in good faith to reduce tensions. He stressed that ensuring adequate distance between forces is an important element in preventing incidents. The EU will provide an expert mission / advisory group to assist with delimitation and demarcation issues, providing technical assistance to both countries.

EU President Charles Michel stressed the importance of restoring the communication infrastructure between Azerbaijan and Armenia, as well as throughout the South Caucasus, ensuring full respect for the sovereignty of all countries. An agreement was reached on the continuation of the restoration of railway lines with the corresponding agreements on border and customs control on a reciprocal basis. The EU is ready to support the development of communications in accordance with its economic and investment programs. The proposed economic consultation platform could also support this process. The leaders agreed to follow up on the results of the meeting.

There should be no geopolitical changes in the region that do not correspond to Iran’s vital and long-term interests – Today, fresh news from Armenia

There is ice in some places in Vardenyats mountain pass