In the case of Pashinyan, only ‘extremely obscene insults’ are appropriate 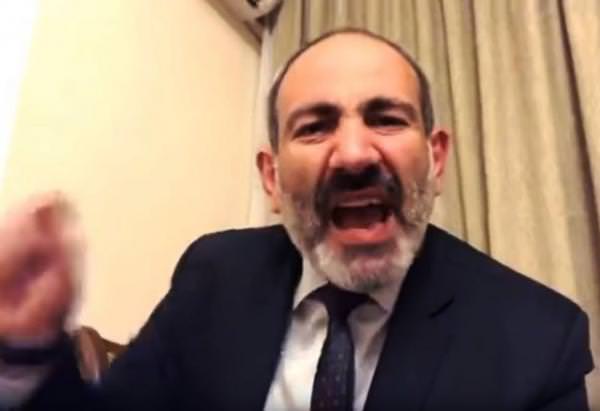 The leaders of the Liberation Movement were brought in for the fact that they demanded in the building of the Foreign Ministry that the fragment of Artsakh that survived the Azerbaijani-Turkish aggression should not become part of Azerbaijan. Respected people – ex-chairman of the Chamber of Lawyers, now leader of the Zartonk party Ara Zohrabyan and well-known journalist Nairi Okhikyan – were brought under police custody. A few days later, the same structure – the RA MFA, through the mouth of its press secretary, announced Armenia’s readiness to normalize relations with Turkey without preconditions.

THE STATEMENT WAS MADE IN CONNECTION with the readiness of the Armenian side to delegate a special representative for these negotiations. This readiness can mean only one thing: Pashinyan has already given guarantees behind the backs of the people on all 3 points of the well-known preconditions, namely: recognition of Artsakh as part of Azerbaijan, rejection of international recognition of the Armenian Genocide and the provision of the so-called “Zangezur Corridor”. Without separate agreements with the leader of the regime, official Ankara would not have touched on the topic of special envoys.

In 2010, the authorities canceled the criminal prosecution for insult, while the current regime on July 30 included a new article 137.1 in the Criminal Code, according to which a court can impose a sentence up to arrest for a “gross insult”. The criminalization of an article for insult is the most typical sign of a dictatorship. The actions of the leader of the regime force people to resort to obscene language (they have not yet invented printed vocabulary for his actions), and therefore something should be urgently taken so as not to share the sad fate of Paylak Sargsyan, who was charged for insulting Pashinyan and Minister of High Technologies Vahagn Khachatryan.

In order not to pay a fine in the amount of 1,000 to 3,000 minimum wages and not go to jail for a term of 1 to 3 months, you can, for a change, follow the example of the RPA deputy chairman. Commenting on Pashinyan’s vulgar attack on the deputy from the “I Have Honor” faction Anna Mkrtchyan about the fact that she allegedly receives an SMS with a special assignment from her “bosses”, Armen Ashotyan turned to the capitulator with the words: “Oh, you are the name of Dostoevsky’s novel 1868! ”

How to refrain from “extremely obscene insults”! The fact is that Pashinyan’s statements and the very essence of Pashinyan’s political behavior leave no room for printed vocabulary, and if the accused under the said article of the RA Criminal Code Sona Agekyan and Mushegh Shushanyan can give free rein to emotions in the virtual space, then the authors of newspaper publications are forced to restrain their emotions: the newspaper is all -so not a fence. But how, tell me, to refrain from “extremely obscene insults” when Pashinyan says that “after 2016 Artsakh has lost all opportunities not to be a part of Azerbaijan”? This is said by a man who shouted from the rostrum of the rally in Stepanakert that “Artsakh is Armenia, period!” And this person also said after the July events in Tavush in 2020, that is, a few months before the Azerbaijani-Turkish aggression against the Republic of Artsakh, said that Aliyev surrendered.

AS POSSIBLE WITHOUT COMMITTING AN ACTION stipulated by Article 137.1 of the RA Criminal Code, observe how agitprop in the service of the regime daily instills into the mass consciousness the theses that the Azerbaijani-Turkish aggression against Artsakh was inevitable, and that defeat in the 44-day war is also was inevitable? Accusations were also brought against Karine Ayvazyan and Narine Hayrapetyan under the mentioned article, and the wording is the same in all cases. This refers to “highly indecent insults” in connection with the activities of individuals.

The article was included in the Criminal Code on the initiative of a person who did not respond to the insult “drunken clown” addressed to him by Aliyev. Well, how not to recall the title of the novel with world fame at the sight of the capitulator shouting from the rostrum of parliament, addressing the parliamentary opposition: “You surrendered the territories!” However, Dostoevsky and all world literature in our case are resting. In our case, excuse me, according to the laws of the political genre, only “extremely obscene insults” are appropriate …

How can you strike a blow at honor and dignity in the absence of them?

The most dangerous people for Nikol are those who understand that the second and third presidents would never have allowed the loss of 5,000 lives and the surrender of 75% of the territory of Artsakh. Pashinyan himself understands this, but is trying to convince the people that there was no alternative to war. He is also trying to convince everyone that the former leaders were negotiating the surrender of 7 districts, which was recently denied by Vice Speaker Ishkhan Saghatelyan.

EARLIER, I REMEMBER, the ARMENIAN MFA denied Nikol’s lie that the surrender of Shushi was allegedly discussed within the framework of the Minsk Group negotiations. There was no such thing, just as there were no negotiations on the surrender of 7 districts. Pashinyan lies when Azerbaijanis build and strengthen military positions on the territory of Armenia.

The invaders rule over the territory of Syunik and Gegharkunik marzes, kill Armenian soldiers, capture them, shoot in the direction of border communities, steal cattle, set fire to fields, and at the same time the capitulator is enjoying the renovation of a school in Vagharshapat. The soldiers in the positions are sleeping on the bare ground, the invaders talk about the continuation of the trench war, they talk to the capitulator in the language of an ultimatum, and he poses in front of the TV cameras in the premises of the renovated school! After the collapse of the army and the surrender of 41 sq. km of territory, it’s time for the prime minister of Armenia to pose in the role of a hero against the backdrop of a fresh renovation. No, the title of Dostoevsky’s novel is clearly not enough here!

Otherwise, in the new year there will not be enough space in prisons for those convicted under this article. However, the lawyers have a free hand: how can a blow to honor and dignity be dealt if the victim has neither one nor the other? With reference to the past 3 and a half years, lawyers have a rich evidence base on this score, with the help of which one can easily substantiate the complete absence of those qualities that may suffer as a result of a “grave insult” …

Marina Mkrtchyan, “The Voice of Armenia”