In connection with the behavior and statements of Alain Simonyan, appointed speaker of the National Assembly, the “Armenia” bloc raised the issue of his resignation. Naturally, Alen Simonyan is against this. He “modestly” believes that his resignation will harm the security of the RA. In reality, the opposite is true. It is the behavior and statements of Simonyan that threaten the security of the RA. However, he is busy with nicholas, that is, he clung to his chair. 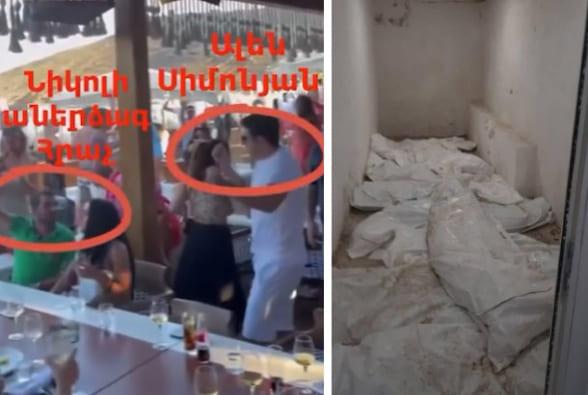 Why does the opposition demand the resignation of Alain Simonyan? This is a political response to his actions.

How in the post of NA Speaker can there be someone who, in the current state of Armenia, hangs out in white shorts on the fashionable beach of Mykonos and selflessly dances there at the disco?

Apparently, Alen Simonyan, who left for Mykonos accompanied by his brother-in-law Nikola and a DJ who became a deputy, does not understand why he, as a high-ranking RA official, cannot hang out in Mykonos. Just 2 days before that, he met in the National Assembly with the relatives of prisoners and missing persons and shed crocodile tears, they say, they do not sleep at night and constantly think about the guys. In fact, he was lying and pretending.

The real state of mind of Alena is the disco “tusilova”.

Alena is not interested in the prisoners’ question. As it turned out, there are no prisoners for him. He is busy with Nicholas in this matter as well.

Alain Simonyan must leave the post of the NA Speaker also for the reason that in the current state of the RA he again harnessed himself to the cause of undermining the Armenian-Russian relations. And this, indeed, is fraught with security threats. Once Nikol and his backpacks have already done it, and we got a tragedy. Now they want to bring us a new tragedy by pouring water into the Turkish-Azerbaijani mill. And this is not permissible.

It is noteworthy that one of the newspapers wrote in defense of Alain that if he resigned, that bunny ox or, worse, the inveterate “dovecote” could come to replace him. They want to say, they say, Alain is better than them, let him stay.

In response to the notes of Alain’s defenders, let us say that “kolobok”, “dovecote”, Alain, DJ, mustachioed and the rest, according to the apt self-definition of “kolobok”, are just backpacks. That is, one field of berries. These are Nikola’s backpacks. Alain is no exception. Simply, when you appoint one of these backpacks as the speaker of the National Assembly and he begins to make steps and statements that harm the interests of the Republic of Armenia, he must leave until the issue of removing the Turkish and Azerbaijani “backpack” is resolved.