Aliyev and Pashinyan talked without witnesses

Armenian Prime Minister Nikol Pashinyan and Azerbaijani President Ilham Aliyev held a trilateral meeting with President of the European Council Charles Michel. As reported by the press service of the Armenian government, the parties confirmed the agreement on unblocking the railway. 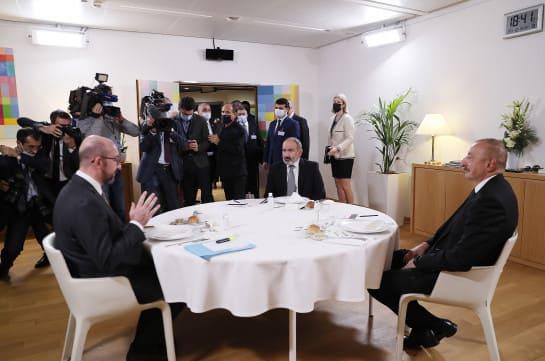 “The railway will operate in accordance with internationally accepted border and customs rules on the principles of reciprocity, under the sovereignty and jurisdiction of the countries. Armenia will get access to Iran and Russia by rail, ”the government said.

The issues on the implementation of demarcation and delimitation between Armenia and Azerbaijan, as well as possible steps aimed at establishing mutual trust were touched upon.

The parties agreed to continue contacts.

“Yes, it’s true,” Michel told reporters, answering the question whether he really came out for a short while during the negotiations to give Aliyev and Pashinyan the opportunity to talk without him. “It is important for them to speak directly to each other,” added Michel.

He also said that the EU will form a group of experts, which will help in the process of solving problems on delimitation and demarcation of borders.