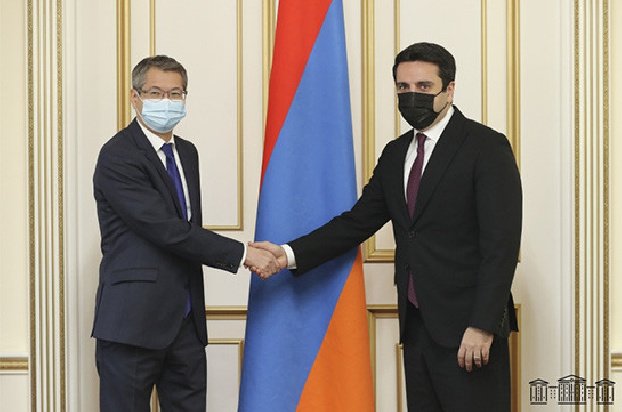 15 December 2021, 09:40 – News – On December 14, Chairman of the National Assembly Alen Simonyan received the Ambassador Extraordinary and Plenipotentiary of the Republic of Kazakhstan to Armenia Bolat Imanbaev, the press service of the parliament reported.

The meeting was attended by the head of the Armenia-Kazakhstan friendship group Vagharshak Hakobyan.

After exchanging greetings, Alen Simonyan congratulated the ambassador on the upcoming Independence Day of Kazakhstan.

The head of the parliament stressed the importance of developing cooperation with Kazakhstan both in a bilateral format and in international parliamentary structures.

The parties touched upon the interaction of the two countries in the IPA CIS, PA CSTO, Ministry of Railways and the EAEU.

In the context of bilateral relations, the President of the Parliament also stressed the importance of inter-parliamentary cooperation, in which parliamentary friendship groups play a key role.

The post-war situation was discussed, in particular, the issue of the return of Armenian prisoners of war and detainees by Azerbaijan was touched upon.

The parties stressed the role of the Armenian community of Kazakhstan in strengthening the Armenian-Kazakh relations.

The Azerbaijani side does not show understanding. Residents of Tagavard are deprived of the opportunity to visit the grave of their relatives. Gegham Stepanyan