0
SHARES
0
VIEWS
Share on FacebookShare on Twitter
December 14, 2021, 16:31 – News – The event was timed to coincide with the 80th anniversary of the battle for the capital. 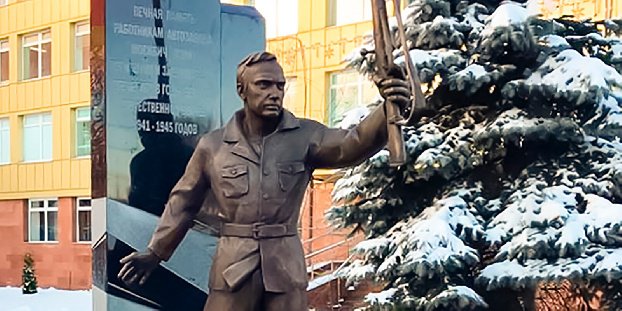 A monument to the workers of the Lenin Komsomol Automobile Plant (AZLK) who died during the Great Patriotic War was erected in Moscow. The object is located at the address: Volgogradsky prospect, house 42, building 1.

“The opening of the monument to the workers of the Lenin Komsomol Automobile Plant who died during the Great Patriotic War is timed to the Day of Heroes of the Fatherland and to a significant date in our history – the 80th anniversary of the Battle of Moscow. The main idea of ​​the monument is that victory in the Great Patriotic War was achieved by the strength, spirit and conscience of a Soviet person. The memory of the heroes – workers of the plant, their feat and contribution to the Victory are now immortalized in the history of the capital, ”commented Alexei Yemelyanov, head of the Department of Cultural Heritage of the city of Moscow.

He also noted that in Soviet times, workers erected a monument to the heroes of the enterprise on their own, but in the 2000s it was lost. The monument was restored according to a new project – the monument was made by honored artists of Russia and Armenia, members of the Union of Artists of Moscow and Russia, Mikael and Vahe Sogoyan.

According to the author of the monument, Mikael Sogoyan, the figure is made of bronze: a worker of the plant, who leaves for the front from the walls of the enterprise in the summer of 1941, is facing the viewer. He grips the rifle tightly in his hand. Two vertical granite steles, about three meters high, have text and an architectural and decorative drawing. Also, at the suggestion of the council of veterans of the automobile plant, a cast emblem of AZLK was mounted.

The authors scrupulously studied archival materials dedicated to the feat of home front workers during the Great Patriotic War, as well as the combat path of thousands of soldiers. Then many workers voluntarily went to the front, and most of them did not return home.

“Before the installation of the monument, work was carried out on the construction of a reinforced concrete base with an area of ​​14 square meters, as well as on the manufacture and installation of granite steles and a pedestal where the sculpture is located. In two months, 16 granite blocks of black and pink colors from the Gabbro and Zheltau deposits, as well as a special facing slab were made at the stone-processing plant for the pedestal, steles and retaining wall, ”said Mikhail Nikiforov, Deputy Head of the Moscow City Overhaul Department.

The space around the monument was improved. Granite paving of the square was completed, parapets were faced, the monument was decorated with architectural and artistic illumination. Also, 10 lanterns, benches, trash cans were installed on the territory, bicycle parking was made, 15 trees were planted (more than 550 shrubs will be added to them in the spring).

During the war, the main part of the plant was evacuated to the Urals, and the remaining facilities in the capital were reoriented to military products. On the basis of the enterprise, among other things, they repaired and replaced parts of tanks and anti-tank guns, such as the T-60, T-70m, the T-34-76 medium tank, the ZIS-2 cannon and many others.

The enterprise changed its name several times, for example, from 1992 to 2010 it was the Moskvich plant. The assembly of Moskvich cars at AZLK was completed in 2001, and in 2012 Technopolis Moskva was created on its territory.

Gennady Degtev, General Director of the Technopolis Moscow Special Economic Zone, noted that the opening of the monument is a significant event for everyone who honors the feat of the generation that fought on all fronts. The special economic zone treats the history of the enterprise and its traditions with great respect and maintains close ties with the AZLK Council of Veterans, which unites about 1,700 people, including World War II veterans, home front workers, and labor veterans. Largely due to their firm civic position, the memory of the feat of their warring colleagues was immortalized in the monument.