On December 8, Pashinyan made a number of important statements in parliament, which, as the oppositionists later said, “should be multilaterally studied and investigated.” Unfortunately, one has to strongly doubt that this will be done, if only because the opposition turned a deaf ear, for example, such a dangerous statement as “the final status of Nagorno-Karabakh does not necessarily mean its independence.” 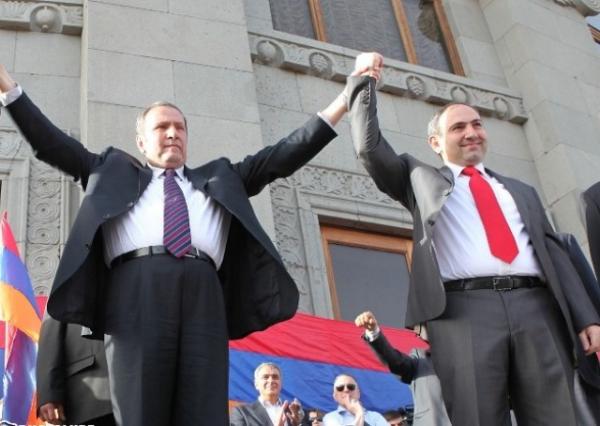 THIS TYPE NEVER SAYS ANYTHING SIMPLY SO, which has been confirmed more than once. Therefore, this proposal should, in all likelihood, be considered a preparation of public opinion for the fact that the Pashinyan government intends to agree to leave Artsakh as part of Azerbaijan. This was evidenced by many indirect factors and actions of the RA authorities over the past year after the war, but, perhaps, for the first time, it has been openly declared.

“When I came to power in 2018, I inherited the negotiation process, the logic of which did not imply the stay of Nagorno-Karabakh outside Azerbaijan,” Pashinyan ranted, addressing the opposition. “You still haven’t said a word about how you yourself would have prevented the war. I say that the only way to prevent the war is to return the territories without defining the status of Nagorno-Karabakh. ”

Here, in fact, a lot can be recalled. For example, by the time the war began, he had been leading the country for more than two years, declaring that “I am negotiating as needed.” Or cite the well-known documents of the negotiation process, proving that, to put it mildly, he is lying and distorting the facts. Recall the failure of the Vienna and St. Petersburg agreements immediately after his coming to power. And also to recall the words of Aliyev in October 2016 that behind the scenes of the negotiations he was forced to recognize the independence of Karabakh.

All this can be done if a person is sincerely mistaken or says something out of ignorance, but not when he is lying deliberately, deliberately and brazenly. Because in the second case, the lie has a very clear goal, which in this case fits into the very proposal: “The final status of Nagorno-Karabakh does not necessarily mean its independence.” Can this statement be considered the official position of Armenia, which the public constantly demands to be voiced?

Considering the policy of the RA authorities and Pashinyan personally long before he came to power (which is recorded in his newspaper articles), given his ideological closeness to Ter-Petrosyan, the answer is almost unambiguous: the Armenian authorities intend to recognize the territorial integrity of Azerbaijan and thereby finally close for myself the question of Artsakh. Pashinyan prepares to do this at the behest of his masters and prepares the ground in advance, again trying to shift the blame onto others. 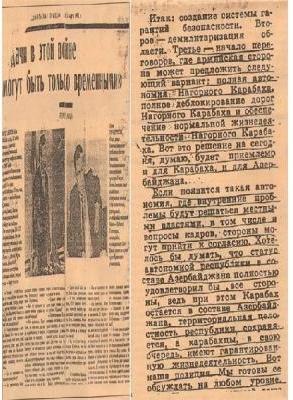 Let me remind you that back in March 1992, when the war in Artsakh was in full swing, in an interview with Komsomolskaya Pravda, Ter-Petrosyan stated: ensuring the normal life of Nagorno-Karabakh. This decision today, I think, will be acceptable for both Karabakh and Azerbaijan. (…) I would like to think that the autonomy status within Azerbaijan would completely satisfy all parties, because at the same time Karabakh remains a part of Azerbaijan, the territorial integrity of the republic is preserved, and the people of Karabakh, in turn, have guaranteed livelihoods. ”

NOW QUESTION: HOW DOES THIS POSITION DIFFER FROM Pashinyan’s statement, first voiced in the spring of 2018 and later confirmed more than once: “Any solution to the Karabakh conflict should suit all three sides – Azerbaijan, Armenia and Nagorno-Karabakh”? It is easy to see that even the wording is similar, not to mention the essence. And the conclusion can be just as unambiguous: Pashinyan is not just completing the plans of his political mentor, he is implementing a program developed by external forces back in the early 90s. The puppeteers of the region did not abandon their intentions, it did not work out in the mid-90s, but now the puppet is so obedient, and the situation is so favorable that it seems that problems should not arise …

Meanwhile, just a couple of days ago, the RA Foreign Ministry, headed by Pashinyan’s closest associate, stressed in its statement: “The crimes committed by the Azerbaijani Armed Forces against the civilian population of Karabakh are a continuation of the policy of Armenophobia, deportation and ethnic cleansing of Karabakh, carried out by the Azerbaijani authorities, which once again proves that under the jurisdiction and control of Azerbaijan it is impossible to guarantee the physical safety and the right to life of the Karabakh Armenians. ”

Let me also remind you that in the last two months alone, 4 people were demonstratively killed in Artsakh: on October 9 – tractor driver Aram Tepnants, on November 8 – worker Martik Yeremyan, on December 3 – shepherd Seyran Sargsyan. On December 5, a conscript soldier of the Defense Army Gor Martirosyan was killed by a shot from the Azerbaijani side – this murder went almost unnoticed. During the same period, a resident of the Martuni region, Migran Musaelyan, was captured by the Azerbaijanis and returned a day later with numerous traces of torture and inhuman treatment. There is no need to talk about the fact that the Azerbaijani Armed Forces are systematically shelling various communities of Artsakh.

Let me stress that this policy of actual genocide is being carried out in the presence of Russian peacekeepers. What will happen if Armenia agrees to the inclusion of Artsakh in Azerbaijan is not difficult to imagine. Peacekeepers will become superfluous – Baku will demand their withdrawal from its territory, and the Armenian population will be completely at the mercy of two genocidal states – Azerbaijan and Turkey. The puppeteers of the region doom the Artsakh people to a new genocide, the RA authorities, headed by Pashinyan, once again, like the Ter-Petrosyan ANM, agree.

It remains to be understood: will there be a force in Armenia that will not allow this again?

Marina Grigoryan, “The Voice of Armenia”