Mine under the EEU

Honorary Chairman of the Supreme Eurasian Economic Council Nursultan Nazarbayev considers it possible to hold negotiations with the Republic of Azerbaijan so that it becomes an observer state in the EAEU. He stated this at a meeting of the Supreme Eurasian Economic Council on December 10. “I cordially welcome the establishment of relations between Armenia and Azerbaijan after many years of falling out. I think we all think so,” he said, ARKA reports. 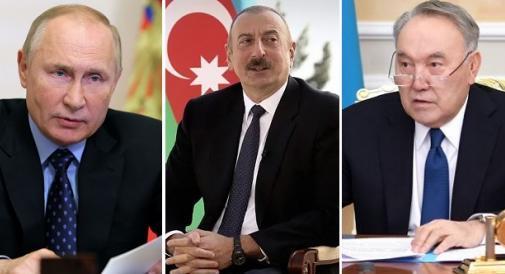 BUT IT IS IMPOSSIBLE TO DEFAULT. Nazarbayev’s desire to bring Azerbaijan closer to the EAEU is understandable. Let it be in the status of an observer, but with a view of a full-fledged membership. And not only Astana is interested in this, hardly any of the members of the union, except Armenia, has grounds to object to such integration. Paradoxically, Azerbaijan’s relations with practically all members of the union, both economic and political, are much better today than those of Armenia. There are, of course, a number of reasons for this, from financial and economic to religious and political.

As for Nazarbayev personally, let’s not forget that we are talking about a figure who, at the stage of Armenia’s accession to the EAEU, openly assumed the functions of a defender of Azerbaijani interests. A year ago, the same Nazarbayev congratulated Azerbaijan on the victory in the 44-day war, emphasizing in a letter addressed to Aliyev: “Dear Ilham Heydar oglu. 2020 was a difficult year for you, but victorious! I was worried about your country, which returned its original territories. This is a historic moment. I congratulate you personally and the people of fraternal Azerbaijan ”.

Therefore, it is not at all surprising that now Nazarbayev invites the same Heydar oglu to observe the EAEU. Today he will observe, tomorrow he will be tempted, the day after tomorrow, maybe he will join.

It’s another matter that such invitations are laying a time bomb under the Union itself. Yes, under the current leadership of Armenia, which did not even utter a word in connection with Nazarbayev’s curtsey to Aliyev, one cannot count on an adequate response from Yerevan. However, any next Armenian government will not ignore the frankly pro-Azerbaijani attitude of the EAEU. If it (the next power) is pro-Western, it will start to actively promote the topic of Armenia’s impossibility of participation in the format of cooperation with the friends of its enemy. If it is pro-Armenian, it will quite rightly raise the question of the unacceptability of Azerbaijan’s approach to the EAEU, not to mention membership in the union.

Adequate official Yerevan cannot wish for rapprochement, even economic, with a country that has territorial claims against Armenia, voiced many times by Aliyev. Adequate official Yerevan cannot wish for rapprochement with the country, whose goal is actually proclaimed the destruction of the Armenian state. One way or another, the idea of ​​rapprochement between the EAEU and Azerbaijan is flawed at least because it is an attempt to import into the organization the insurmountable contradictions between Armenia and Azerbaijan. Not to mention the problem of Artsakh, which only Ilham Aliyev considers solved.

Meanwhile, it is obvious that if there was a desire to preserve the EAEU format in principle and take care of its reputation, the same Nazarbayev had to remind Aliyev of some nuances. First of all, about the unacceptability of plans to open an extraterritorial corridor (we are talking about the so-called Zangezur corridor), which runs through the territory of the EAEU. Armenia and Syunik today are the economic space of the Union and it is not clear why any country that is not a member of the EAEU can count on crossing this space without customs obstacles.

We emphasize: A UNIFIED CUSTOMS SPACE is one of the fundamental principles of the formation of this integration entity. The so-called Zangezur corridor, which Aliyev dreams of, directly undermines this principle.

Following. Armenia joined the EAEU within specific borders according to the regulations for 2014. This means that the 21-kilometer section of the Goris-Kapan road is still Armenian from the point of view of the EAEU, but in general it is still a part of its economic space. And on the territory of this single economic space, Azerbaijan takes and sets up its customs. This is complete nonsense. Especially if we take into account this, in fact, a curious fact: the other day the chairman of the customs committee of Azerbaijan said that the state budget of the country received more than $ 1.2 million for the passage of transport along the Goris-Kapan road. Thus, the Azerbaijani customs makes money on the economic territory of the EAEU. This is already a complete sur.

Of course, Nazarbayev prefers not to talk about such “trifles”. However, like the leaders of other member countries of the Union. And today’s official Yerevan does not indicate such aspects. Thus, I repeat, a mine is being placed under the EAEU, which may well explode at the moment when voices with claims are heard from Yerevan. And sooner or later they will sound. From the mouth of the next government, either guided by the national and state interests of Armenia, or speculating in these interests with the aim, in particular, of dismantling the EAEU.

The refinancing rate is set at 7.75%. Central Bank of Armenia