Fulfilling the cherished dream of the Turkic world and aiming at its maximum possible realization, Nikol Pashinyan became a “patriot”. Having surrendered the statehood of Artsakh to the Turks, is flirting with “patriotism.” He accuses his political opponents of being agents of Turkish influence, and members of his team and his agitprop spread the thesis that the border attacks of Azerbaijanis and the actions of Nikola’s opposition are synchronized. 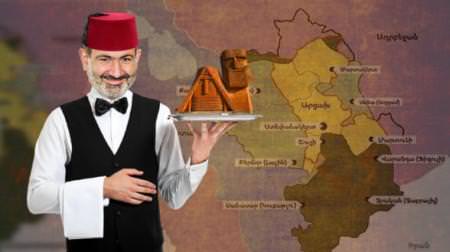 This is the case when the principle “The thief shouts loudest of all,“ stop the thief ”is 100 percent applicable to the part of the Nikolovites.”

There are three layers in our society:

The third layer wrote off the state for itself, as such.

For most of the people of Nikolov, the issue of Artsakh and the losses incurred during the 44-day war are of zero value. They are four-legged, which are found in all states, including developed and established ones. However, the problem here is that representatives of these four-legged animals in other places do not become leaders of the state. Our case is an exception, and this is precisely where the whole tragedy lies.

As for the anti-Nikolovites, this stratum has two opinions. One part is convinced that Nikol Pashinyan is a Turkish and Azerbaijani agent, that is, a traitor, that our enemies brought him to power in the RA – in order to get today’s picture. Supporters of this opinion have a thousand and one arguments to justify the version of betrayal.

Another part of the anti-Nikolovites is sure that Nikol is not a traitor, but simply a moron – the personification of ignorance and stupidity.

A small part of people consider Nikola to be a traitor-idiot.

Which of these options is the most reliable, it is difficult to say – the “autopsy” will show.

At the moment, we can say that Nikol Pashinyan accuses others of pro-Turkish orientation in order to hide his deeds and upcoming steps under the hype.

Nicknamed by Aliyev as a “drunken clown”, Nikol decided to play “patriot”, since “patriotism” is the last refuge of villains.

Changes in the conditions of the “BeWoman” service – Today, fresh news from Armenia