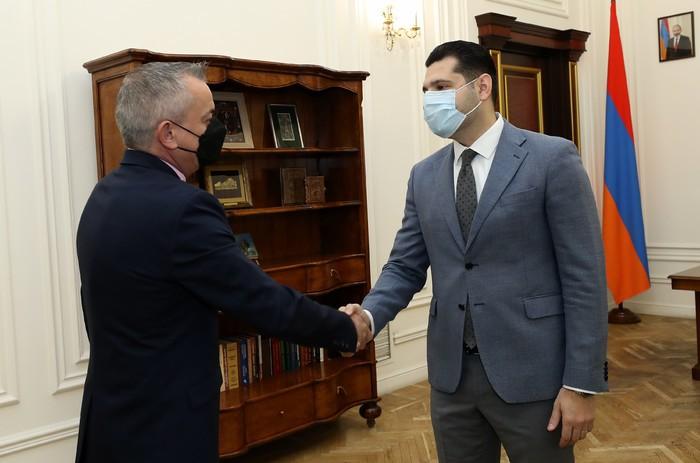 According to the government’s press service, the meeting was also attended by the director of the State Interests Fund of Armenia David Papazyan.

“The Deputy Prime Minister welcomed the guest, expressing his joy over the introduction of a well-known brand, a new business initiative to enter Armenia. He noted that the Armenian government stands by business, ready to support new initiatives as much as possible, which will not only have economic significance, but also to expand business ties and attract new investments. Hambardzum Matjosyan welcomed the opening of “Hard Rock Cafe” in Yerevan, which is scheduled for 2022. in the second quarter. According to him, it will contribute to the current qualitative change in the urban environment of Yerevan, as well as to the development of the service sector.

The interlocutors praised the ongoing bilateral cooperation between Hard Rock Cafe International and ANIF, enabling the implementation of such promising programs and the entry of such global networks into Armenia. It was emphasized that the opening of “Hard Rock Cafe” in Yerevan may be a precedent for others.

The first Hard Rock Cafe opened in London in 1971. The network currently operates in more than 70 countries. The program is co-financed by ANIF with 48% participation. “ANIF is participating in the program as part of the anti-crisis fund programs of a subsidiary of Covid-19 to mitigate the economic downturn,” the government said in a press release.

Fernandez. "When is the third draw of the Champions League?"