I am not me, and the horse is not mine, from a sore head to a healthy one – in line with these sayings, the statements of the representatives of the State Duma faction at a briefing in the National Assembly were sustained. Lies, manipulations, attempts to turn everything upside down, designed for a society of imbeciles with the memory of a fish – all as during the answers of their leader during the government hour in the National Assembly last week. 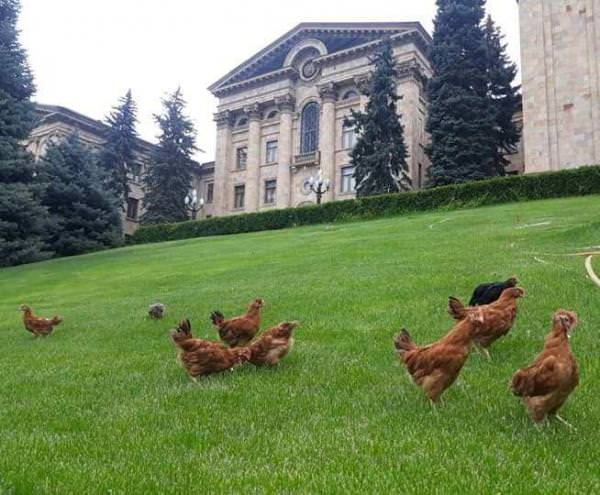 BUT BEFORE ABOUT THE BRIEFING OF THE REPRESENTATIVES of the “Armenia” and “I Have Honor” opposition factions, who presented the draft recalling Alain Simonyan from the post of NA Speaker. “The time that has passed since August 2 (on that day, the election of the chairman of parliament – A.Ch.) has shown that we are dealing with a person who makes statements on the international plane that jeopardize the country’s foreign policy vector, makes unacceptable statements that weaken the country’s defense captured and missing, whom the state is obliged to return to their homeland. It is possible that this is organized by the country’s top leadership and in fact such statements by a third party of the country are at least aimed at weakening the country and statehood, “Artsvik Minasyan said.

In addition, the actions of the speaker during parliamentary sessions, according to the Dashnaktsakan, are often not only illegal, but also specifically aimed at exacerbating the situation with the subsequent use of violence against opposition deputies, and the employees of the state security service simply became an instrument in the hands of the authorities. “Recent events have shown that we are dealing with a person for whom neither the rules of conduct in the National Assembly, nor political culture, nor fundamental democratic values ​​are important. “, – said Minasyan, substantiating the draft of Simonyan’s recall.

The opposition, of course, understands that this proposal will not be accepted, given the numerical superiority of the “State Duma” faction. However, according to Minasyan, this proposal has the character of a legal and political assessment of Simonyan as a speaker, and the political majority as a whole. If they defend Simonyan, it means that they equally share responsibility for all statements and actions of a party member. With this bill, the opposition factions jointly demonstrate their attitude towards a person who, in their conviction, cannot fulfill the duties of the NA Speaker.

The Gadesh people, of course, stood up like a mountain for their speaker, saying that they had much more important issues to discuss, and accusing the opposition of being engaged in performances. To the latter, without the slightest hesitation of conscience, they attributed even the attack of the colleagues from the “State Duma” faction on the opposition in the NA sitting hall in front of and at the command of “face” of their leader. Even the opposition’s appeal to the Constitutional Court to challenge the election results was called the show by members of the pro-government faction. But they kept silent about the opposition’s appeal to the Constitutional Court regarding the detained Armen Charchyan, Artur Sargsyan and Mkhitar Zakaryan. And they also preferred not to talk about the subsequent decision, according to which the arrest of the deputies was in fact illegal. But they accused the opposition of refusing to participate in the work of parliamentary delegations and thus, they say, actually refuses to defend the interests of Armenia, which they allegedly do.

MEMBERS OF THE GOVERNMENT FACTION UNDERSTANDING WHAT an ordinary citizen may not know, and many may not remember that the opposition deputies included in parliamentary delegations are simply not allowed out of the country, since they are under recognizance not to leave. And that the members of the “Armenia” and “I have the honor” factions expressed solidarity to their colleagues, refusing to leave as part of delegations until the ban is lifted from them. How else can a political minority react to the often illegal actions of the authorities?

As for the defense of the interests of Armenia by the GDS, this is a very dubious statement. For example, back on September 14, the secretary of the “I Have the Honor” faction Hayk Mamidzhanyan warned about the steps to be taken to resolve one of the priority issues – the return of prisoners. The authorities should have taken these steps already then, but did not, however, in September it was not too late to implement them. They concerned the ongoing negotiations related to the strategic cooperation between the EU and Azerbaijan.

Mamidzhanyan proposed, first of all, to use all levers, including parliamentary ones, and to ensure that the return of prisoners was a precondition for signing this agreement. Secondly, the precondition for the participation of the Armenian delegation in the December summit of the Eastern Partnership in Brussels, according to the oppositionist, should have been the return of prisoners. “Unfortunately, there is no such pressure on Azerbaijan at the moment,” the MP stated.

In addition, if in these two cases Armenia affects the problem indirectly, then within the framework of the Euronest Parliamentary Assembly the Armenian parliamentarians have direct tools, namely: the opportunity to declare their vital interests and the right to veto. So what? As it turned out, parliamentary diplomacy once again did not use them.

In this regard, Mamidzhanyan noted on his Facebook page the other day that “on the eve of the Eastern Partnership summit, scheduled for December 15, the Bureau of the Eastern Partnership PA (Euronest) issued a statement in which (in terms of security) not a word was mentioned about Azerbaijani aggression against the sovereign territory of Armenia (unleashing a 44-day war, the involvement of the Turkish armed forces and militants, the use of prohibited types of weapons, the occupation of territories – all these are already forgotten topics for the authorities). ”

“Once again, our parliamentary diplomacy did not use the available opportunities. I would like to note that the head of the Armenian delegation is the deputy from the ruling faction Maria Karapetyan, who is a member of the Bureau by virtue of her position and had the right to veto. to cancel the adoption of the statement. The deputies from the authorities do not want to defend the vital interests of our country, “Mamidzhanyan stressed.

But for the pro-government deputies, all this is like water off a duck’s back. Moreover, the deputy from the State Duma Eduard Aghajanyan during the briefing again tried to return to Pashinyan’s perverted presentation of the negotiating legacy he received in 2018. Stating that in 2018 he did not have any opportunity to defend the status of Artsakh outside of Azerbaijan, and that war could only be avoided by surrendering the territories without clarifying the status, Pashinyan invited the opposition to imagine what steps they would take to avoid war. There is no answer yet, all this testifies that the opposition’s statements are aimed at misleading the public, Agadazhyan said today.

It is OBVIOUS that in this way, repeating from day to day several times another manipulative thesis, representatives of the ruling force, be it the legislative branch or the government, are methodically trying to instill in the public the mantras they need.

In addition to the manipulation of public consciousness, Aghajanyan’s statement that the opposition avoids a closed meeting and that transparency is always at the forefront of it can be attributed to a number of manipulations of public consciousness. Say, Pashinyan offered the opposition a closed meeting, it is not clear what else they need. The public, according to him, was tired of the opposition’s complaints about the fact that they were not provided with information, Aghajanyan tried to inspire this very public with his idea. At the same time, without batting an eye, he said that the political majority, the ruling force is ready to answer all questions in any format.

And again – an obvious calculation for a very short memory. For example, the fact that the public forgot how just a couple of months ago the political majority refused to discuss, even in a closed format, the situation on the border, how the authorities refused to allow the opposition MP Tigran Abrahamyan to visit the front line. Or, say, as closed discussions of the National Assembly on the situation at the border, prisoners awaiting signing of documents, which (discussions) were nevertheless convened at the request of the opposition solely thanks to the National Assembly Rules, the government simply ignored or sent officials of a lower rank who were not competent in the data. questions and simply did not have the necessary information.

… On December 15, the opposition factions convened an extraordinary meeting. If the political majority is even a little worried about the future of the country, it is obliged to accept the draft statement of the National Assembly proposed by the opposition. Let us remind you that this is the very draft that the pro-government deputies even refused to include in the agenda during the last session of the National Assembly, seeing in it attempts to express no confidence in the government …

Arevik Chilingaryan, “The Voice of Armenia”