In October, remittances from abroad to Armenia decreased by 12.3%

According to the data of the Central Bank, in the first 10 months of 2021 (January-October) the equivalent of 1 billion 722 million dollars was transferred from abroad to Armenia through banks. Compared to the same period in 2020, it increased by 232 million dollars or 15.6%.

On a 12-month basis (January 2021 compared to January 2020, February compared to February, etc.) remittances increased in all months except October. There was also a slight decline in August (see:՛s infographics).

In October 2021, individuals sent $ 185.4 million from abroad to Armenia through banks, which is a decrease of $ 26 million or 12.3% compared to the same month last year. 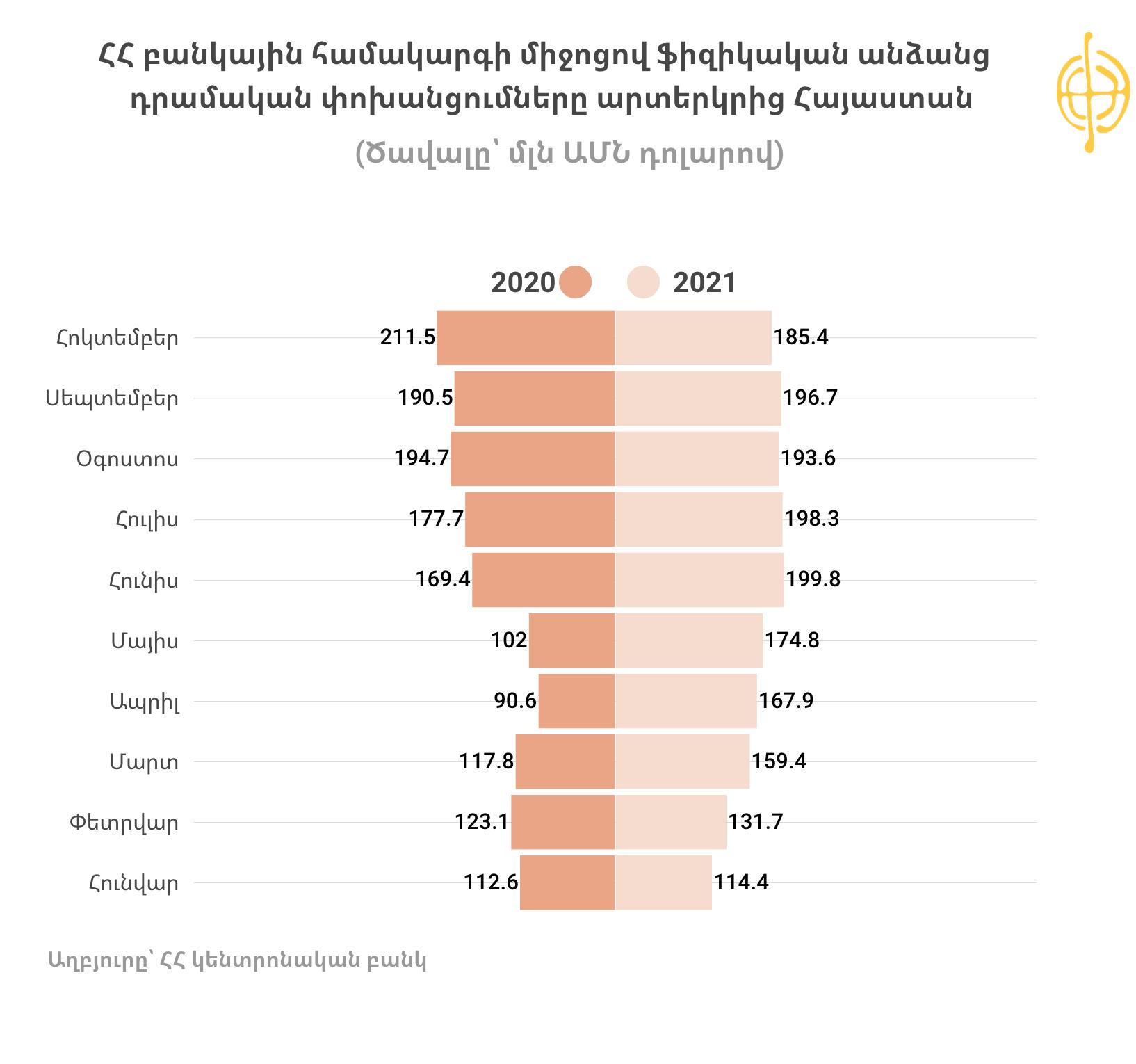 In October, the amount of money received from both the United States and Russia was reduced. It should be reminded that these two countries are the main source of transfers to Armenia.

Thus, the data show that the reduction in remittances in October is largely due to the reduction of remittances from Russia, and to some extent from the United States. Before that, growth was registered in both directions.

As for Russia, the factor of those leaving for work has played a significant role here as well. Due to the epidemic and closed borders spread in the beginning of 2020, a number of Armenians, who go to Russia for seasonal work, remained in the homeland. Some of them were able to leave for the mentioned country only from the end of 2020 and the beginning of 2021. As a result, the remittances from Russia to Armenia automatically increased. However, the October statistics show that problems have arisen here again.

In October, the outflow of money also decreased

In parallel with the reduction of cash inflows, in October of this year, the outflow also decreased, but not as much as the inflow.

In October 2021, individuals sent $ 112.6 million abroad through banks through Armenia, which is a decrease of about $ 5 million or 4.1% compared to the same month last year.

Russia and the United States have the largest share in the outflow, in which directions a decline was registered in October.

In general, $ 979.2 million was transferred abroad from Armenia during the first ten months of this year, which is an increase of about $ 13 million or 1.3% compared to the same months of 2020.

As a result, the net inflow of remittances to Armenia, which shows the difference between inflows and outflows, in January-October 2021 amounted to about $ 743 million, which increased by $ 219.3 million or 42% compared to the same period last year.