Nikol Pashinyan is a beggar. He begs for his chair. Rather, he begs for help to keep this chair. Nichol wants to keep his chair for two main reasons: out of fear and for the sake of money. He knows very well what he has done and what tragedy he brought to our country, our people. Therefore, he is afraid to leave his chair. 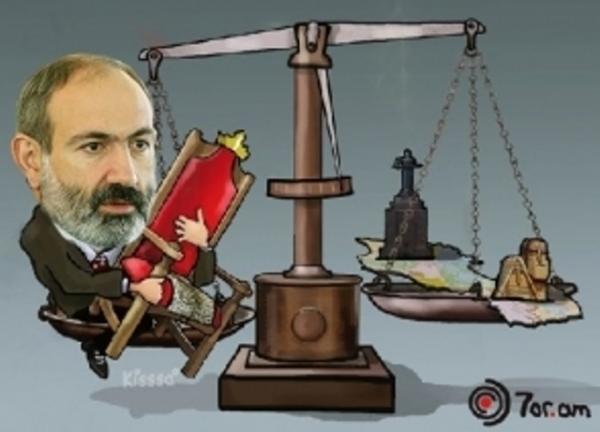 Nikol wants to keep his chair, as he managed to save up a lot over these 3 years, to make up at the expense of the state budget that which he had never dreamed of before.

He is ready to do anything to stay in his chair.

Nikol’s last option, if it is impossible to save the situation through “patriotism” and vilayetism, is the destruction of Armenia in order to avoid responsibility.

As for the directions of begging, here Nichol is multi-vector. After coming to power in 2018, he begged for a seat from the head of the hostile state, Ilham Aliyev, within the framework of the formula “Time in exchange for Artsakh”. Aliyev himself said this a few days before last year’s war, and Nikola did not receive an answer (the answer was promised in an interview with Public Television, which was never aired).

Aliyev opened the brackets, saying that Nikol had asked him for time to fight the opposition, consolidate his power and then satisfy Aliyev’s requests. The latter gave him this time, after which he came for the promised. And so that Nikol would not be perceived as a traitor, the lands of Artsakh were surrendered at the cost of thousands of victims, wounded and left homeless.

Then Nichol begged for his seat from the voters, promising an “Epoch of Peace”, but “threw” them, as he brought us a series of 1-day wars.

Nikol begged for a seat from Russian President Putin, promising to be a greater Russian citizen than the Russians themselves, and to end his involvement in Western Turkish flirting, but he did not keep his promise, inciting his team members from the rostrum of the National Assembly to the Kremlin and leading a cheap anti-Russian propaganda.

After the war, Nikol begged for a seat from Turkish President Erdogan, asking him to meet and offering to open the borders in exchange for the complete oblivion of the Armenian Genocide and work against Russia (the external masters of Nikol and the notorious Zhirayr Liparityan introduced this formula into circulation).

The other day, Nichol was begging for a seat from US President Biden, taking part in an event that has a markedly anti-Russian, anti-Iranian and anti-Chinese vector.

This beggar also made Armenia a beggar by his policy, turning the country into a bargaining chip. Nichol is the main threat to our security. Apart from the Turkish and Azerbaijani threats.