THE CRISIS OF LEGITIMITY: AFTER DECEMBER 5 PASHINYAN HAS NO RIGHT TO SPEAK FOR THE PEOPLE

0
SHARES
0
VIEWS
Share on FacebookShare on Twitter
December 10, 2021, 08:00 – News – According to Munchausen, the people who inhabited the moon wore their heads not on their shoulders, but under the armpit of their right hand, and when they wanted to know the thoughts of the common people, they sent this part of the body “to wander in the crowd.” If Pashinyan and the rest of the leaders of the “Civil Contract” had wandered around among the voters on December 5, they would have learned that the number of those wishing to rip their heads off is growing exponentially. 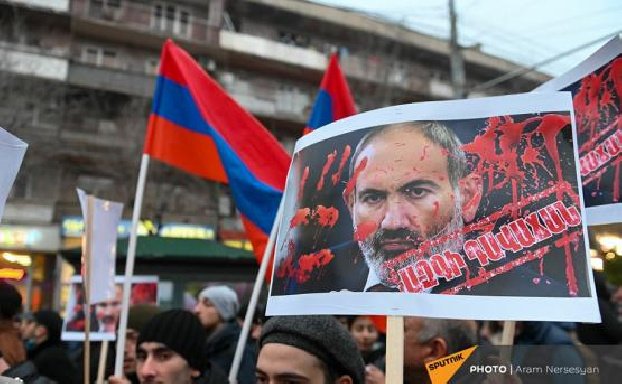 ELECTION RESULTS IN 36 LARGE COMMUNITIES OF THE COUNTRY were for “GD” just a failure. Suffice it to say that the ruling party could not win in large cities, except for three, in general, only 47% of voters cast their votes to the representatives of the authorities, in 12 communities they will not be in local government at all, and only in 15 out of 36 communities the ruling force will be able independently, without entering into a coalition with anyone, form a local government body.

Trying to somehow justify his defeat, Pashinyan then tells tales that the government was allegedly busy with more important problems of external security and did not have time to properly prepare for the elections, did not engage in falsifications and bribery of voters, then he agrees that “Years of electoral fraud have undermined the system of state resistance and led to catastrophic security chain reactions.”

Envy, Goebbels! No one needs to make any diagnosis, he is such in himself. It turns out that this election fraud by the “former” led to the disastrous consequences of the 44-day war! Yes, we knew he was a cynic. But for this … Pashinyan, in my humble opinion, must immediately take his words back and apologize for the next session of demagoguery. Well, about the apology is, of course, a fantasy. But is it even possible to stop constantly muddying the waters?

Let us recall the content of one of the fables of the great Aesop. “The fisherman caught fish, scaring it with a stick on the water and driving it into the net. Someone began to scold the fisherman: why are you muddying the water? and demagogues in states then live best of all when they manage to start a turmoil in the country. “

In fact, the authorities concentrated all their capabilities and resources on the local elections and did everything possible to achieve the desired results on December 5. Since when did she become interested in “problems of external security”?

The enlargement of the communities was organized so that the “State Duma” could gain as many votes as possible. And was it by chance that people loyal to the regime were appointed as acting heads of communities in many communities before the elections? And what about “community assistance” and “social assistance” that poured out on the communities as if from a cornucopia before the elections? What is this if not bribery of voters? And what about open pressure on citizens and repressions against representatives of the opposition forces?

The authorities used the administrative resource in full, but it was another matter that it did not help either. By the way, in the USA, for example, back in 1939, the Hatch Act was passed, prohibiting the use of administrative resources in elections. Violation of the law is punishable by imprisonment. All that is allowed for an American official during the election is to personally vote.

LET’S REPEAT, THE AUTHORITIES TAKEN EVERYTHINGto achieve the desired results on December 5, but suffered a crushing defeat. Even Garik Sargsyan, the prime minister’s favorite, a former governor and a great specialist in crocodile breeding, could not be made the mayor of Vedi. Pashinyan’s empty promises will not deceive anyone. The king is naked. And not only naked, but naked and nasty. It remains to apply the Robespierre approach to the demos: “If the people do not support us, replace the people.”

But let’s forget about the premiere, let’s take a short break, so to speak, to meet the beautiful. Let’s, really, about something pleasant. Well, I don’t know … About the deputy Hovik Aghazaryan or something.

The other day, fellow citizens, it took me into my head to do something that I, to my shame, had never done before, namely, read Aghazaryan’s interview. Maybe, I thought, his thoughts would be a source of wisdom and happiness. How right I was in my guesses! For Hovik Aghazaryan literally stated the following: “Where the representative of the” Civil Contract “did not win, he won the” Civil Contract “.

Agree, only completely liquefied brains could come up with such a thing. The deputy, as they say, “fully deserved hospitalization.” If this thought (provided that it was a thought, of course) had been communicated to the psychiatrist in advance at the appointment, then Aghazaryan would now be playing backgammon with the orderlies. But he avoided communicating with the doctor and preferred companions from the parliamentary majority. And their collective delirium has become our reality for so long.

Citizens who have at least a minimal sensitivity to common sense issues cannot but ask: what do the results of the December 5 elections testify to? In our opinion, the elections to the local self-government bodies not only on December 5, but also held earlier – on October 17 and November 14 – indicate that the people reject nicholism, this power no longer reflects the true picture of public sentiment and there is a crisis of the regime’s legitimacy.

And this, in turn, means that Pashinyan has no right to speak on behalf of the state and the people, any of his decisions, actions taken or documents signed by him are illegitimate.

"It is inadmissible for the RA National Assembly to express doubts about the best protection of the interests of the RA and Artsakh by the RA Government and its leader." Maria Karapetyan