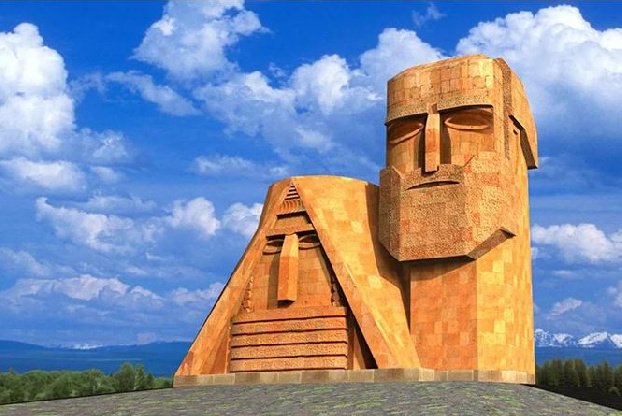 Exactly 30 years ago, on December 10, 1991, in the conditions of hostilities and shelling of peaceful settlements, our people organized a high-level referendum on independence, charting the way to achieve our goals. By adopting the Constitution of the Republic of Artsakh in 2006, we reaffirmed our adherence to the values ​​and ideas that formed the basis of our new independent statehood. No matter how difficult and bloody this thirty-year path was, we were able to create and strengthen our statehood through national efforts, remaining committed to the value priorities of the Artsakh movement.

Despite the mediation efforts of the OSCE Minsk Group for the peaceful settlement of the Azerbaijan-Karabakh conflict, the principle of non-use of force and other well-known principles of international law, Azerbaijan has carried out military aggression against the Republic of Artsakh and its civilian population many times, of which the 2020 aggression was the most difficult test for our statehood and people. Despite the enormous human, territorial, material and moral-psychological consequences caused by it, the Republic of Artsakh still exists, and the will and firmness of our people on the chosen path of independence are unshakable. A vivid confirmation of this is the presence of a 120 thousand population in Artsakh in such a short period, ensuring a high level of safe environment, the work of state institutions, development efforts, restoration of infrastructure and economy. State bodies exercise their powers on the basis of the Constitution and legislation of the Republic of Artsakh, and it is symbolic that today in two large communities elections to local self-government bodies are being held, as a small but important manifestation of our determination in the matter of state building.

Regarding the post-war situation and our plans for the future, I would like to highlight several main points:

Today we can state that, despite the deliberate provocations from Azerbaijan, thanks to the efforts of the Russian peacekeeping contingent and the Defense Army, relative stability remains in Artsakh, which makes it possible to outline plans for the future and take effective efforts in this direction. In this regard, I would like to express my deep gratitude to all servicemen performing their duty to defend the Motherland, as well as to the entire peacekeeping contingent and personally to President of the Russian Federation Vladimir Putin, thanks to whose direct efforts the encroachments of the Turkish world were prevented and peace is preserved. Considering the extremely destructive and aggressive position of the Azerbaijani side and the resulting uncertainty about the prospects and timing of a final and just settlement of the conflict, the authorities and people of Artsakh believe that the presence of Russian peacekeepers in Artsakh should be guaranteed and indefinite until the need for peacekeeping forces disappears. The needs and opinions of the people of Artsakh should be key factors in this matter, since we are the main beneficiaries of the peacekeeping mission.

Another important direction on the way to ensuring an adequate level of security is the consistent development of the capabilities and fortifications of the Defense Army, taking into account the existing challenges and the specifics of the situation. Over the past year, some tangible work has already been done, from year to year we will increase the effectiveness of our own security mechanisms.

We will continue to fight for the unconditional recognition of the right of our people to self-determination and the return of the occupied territories. We are for a peaceful settlement of the conflict, and international recognition of the independence of the Republic of Artsakh on the basis of the right to self-determination is our main and uncompromising goal, which will pave the way for the realization of the ultimate goal of the Artsakh movement. In this regard, we count on the unconditional and consistent support of the entire Armenian people, which should not despair and doubt the path we have chosen.

One of the main guarantees of the preservation of Artsakh by the Armenian and the pro-Armenian settlement of the conflict is the residence of the Armenian people in their homeland. In this sense, the post-war demographic indicators look quite promising, but to achieve the desired results, it is necessary to attract serious resources and efforts.

In this context, the satisfaction of housing needs is the main issue that we began to address immediately after the war. In particular, we have begun large-scale construction in different parts of Artsakh and are planning to build about 5,000 apartments for internally displaced persons and other vulnerable groups within three years. Of course, this does not mean that we are abandoning our lost homeland, but we are well aware that the negotiation process may drag on for many years. It is unacceptable for us to leave the families of internally displaced persons to the mercy of fate or to apply to them the notorious experience of being kept in tent villages.

Continuing the topic, I want to emphasize that the housing issue in Artsakh should receive a comprehensive solution. Therefore, according to my campaign promise, each family will have their own apartment, but patience is needed to eliminate the dire consequences of the war. Along with this process, we will gradually implement new housing programs to support all families in need.

We have already started or are planning to start a number of programs to assist the natural and mechanical growth of the population in Artsakh. This is one of the main areas where consolidation, large-scale and consistent participation of all Armenians is needed, taking into account the volume of required resources.

Socio-economic problems are most acutely manifested due to the loss of the main part of the economic potential as a result of the war. Of course, thanks to the humanitarian assistance of the Government of the Republic of Armenia, the Hayastan All-Armenian Fund and other charitable organizations, the Government of the Russian Federation and the ICRC, we managed to solve many problems, but institutional solutions require an increase in the state budget of the Republic of Artsakh in the coming years. I am pleased to note that thanks to the support of the Republic of Armenia in 2022, the expenditure part of the state budget of the Republic of Artsakh will amount to about 215 billion drams. For comparison, I would like to note that in 2020 the state budget of our republic was about 122 billion drams. This will definitely provide an opportunity to solve important problems facing the government, however, to consistently improve the socio-economic and demographic situation, much more resources are needed, including in the form of economic investments. Therefore, I hope that all active pan-Armenian circles will directly participate in the implementation of this important direction.

Of course, along with this, it will be important for us to fully implement free and high-quality health care and education systems. The process began even before the war and continues today. New programs are planned to be launched next year.

Before the war, and especially after the war, I was open for cooperation with all political forces, being confident that only through joint efforts can we overcome the existing difficult challenges. In this sense, we have many visible results, which are largely due to the prevailing atmosphere of cooperation. However, I myself am not satisfied with the degree of involvement and participation of all active social and political forces in the state building of Artsakh and the solution of existing problems. In the near future I plan to start a new round of consultations with all circles to discuss the possibilities of using more effective formats and mechanisms. We will constantly carry out reforms in the public administration system to increase the level of efficiency, transparency and public accountability of government agencies.

These are plans for the future that I and the government I am going to implement. Disappointment, mourning, and the loss of most of the Motherland made us feel depressed and uncertain, but I urge everyone to cheer up. I believe that, just as now about 120,000 Armenians live and create in their homeland, we will be able, by supporting each other, to solve all problems, successfully overcome all challenges and jointly win new victories.

I again appeal to all parliamentary and extra-parliamentary political forces, all local and pan-Armenian organizations and individuals with an appeal to leave aside all differences. The door of cooperation is open to all of you. Let’s unite our efforts and build the homeland of our dreams in the name of our Artsakh, the bright future of our people and the sacred blood shed by our fallen heroes. Power is temporary, only the values ​​for which we live and fight are unshakable …

About the war in Artsakh

From September 27 to November 9, 2020, the Azerbaijani Armed Forces, with the participation of Turkey and the foreign mercenaries and terrorists recruited by it, carried out aggression against Artsakh at the front and in the rear using rocket and artillery weapons, heavy armored vehicles, military aircraft and prohibited types of weapons (cluster bombs, phosphorus weapon). Bayraktar drones were also actively used, which caused a lot of damage. The strikes were delivered, inter alia, at civilian and military targets on the territory of Armenia.

On November 9, 2020, the leaders of the Russian Federation, Azerbaijan and Armenia signed a statement on the cessation of all hostilities in Artsakh, according to which, in particular, the city of Shushi, Aghdam, Karvachar and Lachin regions passed to Azerbaijan, with the exception of a 5-kilometer corridor connecting Karabakh with Armenia. A Russian peacekeeping contingent is deployed along the contact line in Karabakh and along the Lachin corridor. On January 11, 2021, the Presidents of Russia and Azerbaijan Vladimir Putin and Ilham Aliyev and the Prime Minister of Armenia Nikol Pashinyan signed a joint statement aimed at developing the region and unblocking communications.