The destruction of the Armenian statehood continues

Political scientists came to the conclusion that Pashinyan decided this time to shift all responsibility for the betrayal onto others. After he signed a tripartite statement on November 9, 2020, most of the deputies from the My Step faction honestly admitted that they were not aware of the content of the document and the timing of its signing. This time, the capitulator decided to go the other way. He brought the majority faction up to date so that no one would try to evade responsibility after the fact. 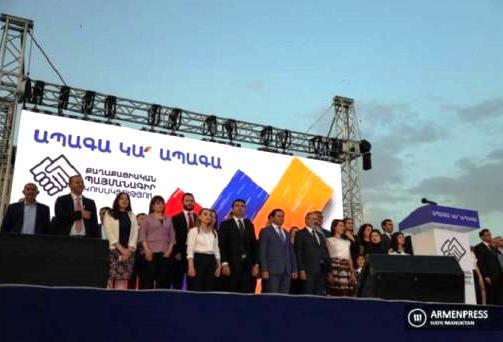 A massive arm twisting game is in progress

Recently, rumors about Pashinyan’s readiness to recognize Artsakh as part of Azerbaijan have been actively circulating in political circles. There are also references to the corresponding agreements between the capitulator and Aliyev.

IT IS OBVIOUS THAT IN THIS SITUATION THE MISSION of the Russian peacekeepers in Artsakh will lose all meaning. There are also rumors that the recognition will take the form of a concrete peace document if Russia is forced to take military action in response to the Zelensky regime’s attempt to purge the Donbas. A large-scale game of twisting the arms of the Kremlin is underway. Efforts to oust Russia from the South Caucasus are only part of a global plan, moreover, in this game, Pashinyan is used as an obedient puppet of Baku and Ankara.

The betrayal scenario looks thought out to the smallest detail. Opposition forces in Armenia have taken a wait-and-see attitude, believing that Moscow’s intervention in the very near future will lead to a rapid fall of the regime, the formation of an interim government that will stabilize the situation in the country and begin preparations for holding early parliamentary elections. If the change of power fails and the Russian presence is under threat, then political scientists predict the transformation of the current regional situation into a Russian-Turkish war. Russia cannot leave the South Caucasus, which has been in the sphere of its strategic interests for centuries …

The capitulator tries to tarnish the betrayal of all

The regime is preparing to sign a second document of surrender. It’s as clear as daylight. It is for this reason that the emergency meeting of the Civil Contract faction, which began on the evening of December 2 and lasted well past midnight, is still featured as the main news of information blocks, acquiring more and more details.

The main agenda of the meeting was not the content of the future document, but the fact that either Deputy Prime Minister Mher Grigoryan or Defense Minister Suren Papikyan would sign it. Moreover, Pashinyan notified his backpacks that the new document might need to be passed through parliament, which means that the “GD” faction will have to work out parliamentary salaries, bonuses and parliamentary tourism …

Political scientists in unison came to the conclusion that Pashinyan decided this time to shift all responsibility for the betrayal onto others. Let me remind you that after he signed the trilateral statement on November 9, 2020, most of the deputies from the My Step faction honestly admitted that they were not aware of the content of the document and the timing of its signing. This time, the capitulator decided to go the other way. He brought the majority faction up to date so that no one would try to evade responsibility after the fact. There is no question of agreement or disagreement between Grigoryan and Papikyan. These gentlemen understand that their future well-being depends on Pashinyan, and no one needs them without Pashinyan.

Let me also remind you that after the November 9 statement, President Armen Sarkissian also announced that he did not know anything. The other day he used a meeting with the leader of the “5165” movement Karin Tonoyan to inform the public through it that he knew nothing about the delimitation and demarcation process. Tonoyan said that the president does not know about the cards on the basis of which this process is carried out, and even about the principles on which it is based.

Let me remind you that according to the Constitution (article 123, paragraph 1), it is the president who is the head of state, and not the prime minister, as many people still mistakenly believe. Only this time Sargsyan will hardly be able to leave untainted, today is not November 2020, and therefore the capitulator is trying to stain everyone with betrayal. This time no one will leave untainted, but the president is unlikely to resign so as not to go down in history as a traitor.

“Delimitation and demarcation of borders is a good thing, but …”

Bayramov announced in Stockholm that the Karabakh conflict was over, secretary of the “I Have Honor” faction Hayk Mamidzhanyan suggested that during the night meeting of the “Civil Contract” faction with the participation of the Prime Minister and the Defense Minister, they discussed signing a document on delimitation and demarcation of borders.

FORECASTS THAT THE PROCESSES will accelerate in the second half of December are related to the meeting scheduled for December 15 in Brussels, as well as to the fact that at this time the Armenian society is busy preparing for the New Year holidays and does not pay much attention to political processes. There are also forecasts that the acceleration will come in the second half of January …

The first boils down to Pashinyan’s inability to defend Armenia’s interests on international platforms. The second reason is that “Azerbaijan is forcing us to go to these processes under the threat of force, and in such a state it is impossible to go to such actions.” The third reason is also formulated very precisely: “If you are ready to give everything that they want from you to the world, without getting what we need, then how will you then solve the Artsakh problem?” – stated the RPA Deputy Chairman.

And one more thing: when the message about the new preconditions of Aliyev came, many recalled the warning of the former head of the State Department for National Security and Defense, David Shahnazaryan, who said: “I have serious suspicions that the Turkish armed forces are in Azerbaijan today. in Nakhijevan. I have relevant information. What is happening today is the continuation of the surrender – the destruction (“kazmakandum”) of our statehood. ”

Gaspar Adamyan, “The Voice of Armenia”