Morals of the gateway in the parliament of Armenia

It all started with the fact that on December 7 at approximately 14:30 in the NA corridor the assistants of the deputies of the “Armenia” bloc and the representatives of the “Civil Agreement” Hrachya Hakobyan and Sisak Gabrielyan argued. The parties limited themselves to a short verbal skirmish and went their separate ways. Do you think this is the end of the story? Nope. There is an intermission. And then – the second action, so that no one seemed a little. 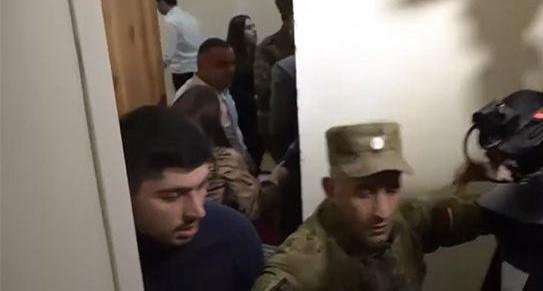 AFTER A SOME TIME, SOMEONE FROM THE OFFICE of NA Vice Speaker Ruben Rubinyan came to the assistants of the opposition deputies and invited them to the office of their boss to, allegedly, over a cup of coffee, discuss the “corridor verbal skirmish”. Assistant to MP Tadevos Avetisyan Gerasim Vardanyan, assistant to MP Armenuhi Kyureghian Taron Ghazaryan and assistant to Deputy Speaker Ishkhan Saghatelyan Sevak Nazaryan accepted the proposal.

Do you think, fellow citizens, were they really treated to coffee in Ruben Rubinyan’s office? That’s right, the “treat” turned out to be completely different. About 20-30 people, led by deputies Hrachya Hakobyan, Vahagn Aleksanyan, Sisak Gabrielyan, attacked the opposition like a flock of jackals and started beating them. Moreover, the security service of the National Assembly chose not to interfere. The usual behavior for this pack is to attack from around the corner with a tenfold advantage in numbers.

What is this, fellow citizens? Politics to divert public attention from Alain Simonyan’s scandalous statement? Manic psychosis, schizophrenia, alcoholic delirium, as scientifically called delirium tremens? Hooliganism, the introduction of morals into the gateway to parliament?

Probably, after all, the meanness repeatedly shown by these Neanderthals. Vileness can also be consistent, and for me – in the name of the purity of the genre – in this form it is even more useful for society! At least there is no room for misunderstanding. And don’t tell me that power corrupts people. No, these are some people, when they are in power, they spoil the power.

Is there a cure for this kind of moral moronism? With therapy, no. If it is treated at all, then only with such radical medicines of fate, which I would not even advise them.

Reportedly, the Prosecutor General’s Office has already sent video footage of the fight to the SNB. It is not at all excluded that a decision will soon be made: to initiate criminal proceedings against … the assistants of the members of the “Armenia” faction beaten by the deputies. Do you remember how skillfully the law enforcement officers managed to hush up the case of the beating of opposition deputies in the NA session hall a couple of months ago? So we can refrain from further comments on this topic for quite clear reasons. So clear that, for the sake of respect for the reader and to save space, I omit some obvious things.

By the way, there are rumors that Pashinyan himself is going to condemn the incident in parliament. Why did it happen? Nikolovsky Komsomol is true to itself, that’s all. That was how much intelligence they had – they invested everything in the attack on the opposition. Everything is in line with the policy of the party, as taught. This entire detachment was collected and selected by Pashinyan personally under the supervision of his external masters, right? These are not impostors, but the Nikolovsky Komsomol! So what are the claims? And what will change in the servants’ room after the master’s condemnation? Will there be a moral upheaval within them? Will there be a turn in consciousness? Well, well, let’s not hallucinate.

And HERE IS CONDEMNATION BY THE CITIZENS OF THE VEGETABLE ACT of the elite squad of Nikola – this is a completely different matter. Immediately after the incident, indignant young Dashnaktsakans gathered in front of the parliament. “We demand that the State Duma deputies who were involved in the beating of the assistants of the opposition parliamentarians resign. Otherwise, we will also begin to resolve all issues by force. They themselves took the first step and untied our hands,” the audience said.

Nevertheless, the deputies of the State Duma managed to avoid punishment for meanness, at least on December 7, because they simply escaped through emergency exits.

Oh, do not communicate with them, fellow citizens – they are not good. Themselves spoiled, and sow leprosy around. We learned to speak, adapting to the Armenian language, but you cannot believe their word, which is similar to a human. And they attack any stranger.